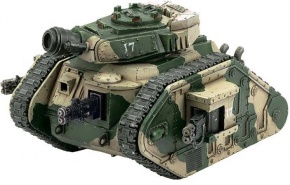 The Leman Russ Demolisher is a specialist Astra Militarum Siege Tank designed for short-range bombardment based on the Leman Russ Battle Tank chassis. It is the most common variant of the main battle tank, used typically for urban and siege warfare.[1][3a]

The main difference between the original Leman Russ and the Demolisher variant is its armament. The primary weapon of the tank is its turret-mounted Demolisher Cannon, a powerful short-ranged cannon equally effective in destroying buildings and bunkers as it is enemy tanks and infantry.[1] The cannon has an effective range of one kilometer and in some patterns includes a carousel automatic loader and automatic shell ejector system.[4] The Demolisher tank's sponson weapons are normally geared towards the task of clearing enemy trenches, fitted with either Heavy Flamers or Plasma Cannons to fulfill this role,[5b] although they can also take Heavy Bolters or Multi-Meltas.[2b] While most patterns will use Heavy Flamers for this role, those Demolisher tanks built on Ryza favor the use of plasma weapons due to that Forge World's proficiency with such technology.[5a] These plasma cannons have a range of one and a half kilometers, and are powered by a 4.2 kilotherm plasma generator capable of charging at 200 therms/second at full revolution.[4] Finally as in the original variant the Demolisher is fitted with a hull-mounted weapon, either a Heavy Bolter or Lascannon.[2b] Unlike the Demolisher Cannon the Lascannon is stabilised with an effective range of two kilometers; it is powered by a 4.2 megawatt generator good for one full hour of combat and can go from dead to full charge in two.[4]

Due to its mission role as a siege tank the Demolisher tank is fitted with additional armour plating compared to standard tanks.[2a] Its suite of auspex sensors includes passive night vision, laser range-finder and a laser warning system. The V12 air-cooled multi-fuel engine used in some patterns produces 840 horsepower and gives the tank an operational range of 250 kilometers on-road (100 kilometers off-road); this can be extended an additional hundred kilometers through the use of optional 100 litre auxiliary tanks.[4] Other standard features include a Searchlight and Smoke Launchers, while some tank crews upgrade it with Camo Netting, Dozer Blades, Extra Armour, a Hunter-Killer Missile and/or a pintle-mounted Heavy Stubber/Storm Bolter.[5b]