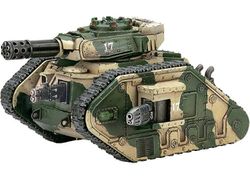 The Punisher is directed towards anti-infantry firepower thanks to its main weapon, the Punisher Gatling Cannon. This multi-barreled weapon allows the Punisher tank to achieve a rate of fire unmatched by all but a few other vehicles, though at a loss of anti-tank effectiveness, and Punisher tank crews have a reputation for being trigger-happy with this potent weapon. Indeed it is typical for Punisher crews to strip out all non-essential items in order to cram in as much ammunition as possible before setting off for battle.[1a][2]

Similar to the Leman Russ Demolisher and Leman Russ Executioner the Punisher is more heavily armored to survive attacks at close range, especially useful when used against hordes of Orks and Tyranids. Often squadrons of Punishers will operate ahead of the main Imperial force, scything down the enemy to at the very least more manageable numbers for follow-on forces. It is predominately an infantry support vehicle however, and it's lack of sufficient anti-tank weaponry makes it vulnerable when facing enemy armoured forces.[2]

In addition to it's main weapon the Punisher carries a hull-mounted Heavy Bolter, Heavy Flamer or Lascannon. It can also be outfitted with two sponsons which mount either heavy bolters, heavy flamers, Multi-meltas or Plasma Cannons. Standard equipment also includes a Searchlight and Smoke Launchers and it can be upgraded with Camo Netting, a Dozer Blade, Extra Armour, a Hunter-Killer Missile and/or a pintle-mounted Heavy Stubber/Storm Bolter.[1b]