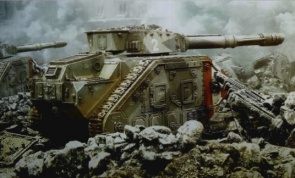 The Leman Russ Vanquisher is a rare and specialised variant of the Leman Russ Battle Tank used by the Imperial Guard. It mounts the significantly more powerful Vanquisher cannon, firing special Vanquisher shells which are extremely effective at penetrating armour even at great ranges, and is a favourite among tank company commanders.[1a][2a]

The Vanquisher was primarily built on Forge World Tigrus until it was overrun by the Ork Warlord Arrgard the Defiler in M35, resulting in the number of remaining Vanquishers reserved only for experienced tank crews. With the loss of Tigrus the Adeptus Mechanicus made strenuous efforts to reproduce the tank's specialised cannon, selecting a number of Forge Worlds known for their craftsmanship and devotion to the Machine God to spearhead the effort. While the process was slow and with limited success two Forge Worlds — Gryphonne IV and Stygies VIII — have succeeded in producing their own version of the Vanquisher while several other worlds continue their work. A small but increasing number of Vanquishers produced by Gryphonne IV and Stygies VIII have been used to equipped Imperial Guard regiments, however both jealously guard their secrets and have not allowed any comparative tests to take place.[1a] Only those tank crews that demonstrated they can perform their duty against the most heavily armoured enemies, may receive the Vanquisher as their new battle tank.[5a]

The centerpiece of the tank is its Vanquisher Cannon, a modified cannon with superior range, accuracy and a first-hit kill ratio.[1a][2a] Both Forgeworlds produce a cannon able to achieve these effects, albeit through different methods, and the tank has achieved a fearsome reputation among the Imperial Guard and its enemies.[1a] The Vanquisher is also equipped with advanced auspex sensors including threat detectors, terrain finder[4a] and motion sensors,[4b] along with Targeter gear including range-finders.[1g] Many are fitted with co-axial Storm Bolters while other secondary weapons come in the form of a hull-mounted Heavy Bolter, Heavy Flamer or Lascannon; if fitted with side sponsons it can also mount additional Heavy Bolters, Heavy Flamers, Multi-meltas or Plasma Cannons. A Searchlight and Smoke Launchers are standard on Vanquishers, while other upgrades include Camo Netting, a Dozer Blade, Extra Armour, a Hunter-Killer Missile and/or a pintle-mounted Heavy Stubber/Storm Bolter.[2b]

In the relatively large or lucky Armoured Battle Groups the Vanquishers may be armed with the special Beast Hunter Shells which are mostly used against enormous alien creatures and Tyranid bioforms. The shell themselves contains a powerful bio-mutagenic acid designed to be devastating against all organic matter.[5b] 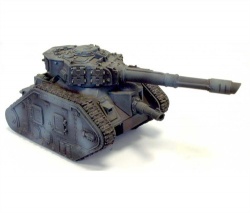 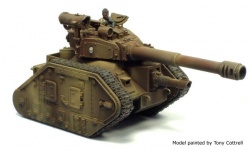