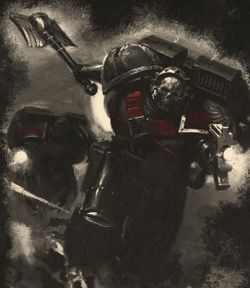 Lemartes is a particularly strong-willed Chaplain of the Blood Angels, the only Battle-brother to date who has managed to contain the Black Rage. He now serves as Guardian of the Lost, the Warden of the Angels' Death Company.[1]

Lemartes succumbed to the Black Rage while the Blood Angels were preparing to deploy against orks on Hadriath XI. Like all members of a Death Company, his only options were to fall in battle, or, in the unlikely event he survived, to be executed by High Chaplain Astorath. Yet after the battle, when he was taken to the company's field Apothecarion, Lemartes insisted that he was in control of himself. Astorath hesitated, because Lemartes was clearly in the grip of the Rage, yet he was still coherent and able to restrain himself from attacking his own brothers. Astorath made the incredible decision to send Lemartes in stasis back to Baal, to be thoroughly examined by the Sanguinary Priests.[1]

Every test the Sanguinary Priests ran showed the same startling conclusion: Lemartes had been struck by the Rage, yet his willpower was keeping it in check, a thing unheard of in the entire history of the chapter. They warned Astorath that it would be impossible for Lemartes to stay in control forever, so Astorath offered him his unique role as leader of the Death Company.[1]

Under his guidance, those Blood Angels lost to the Rage fight like heroes of legend, winning some measure of redemption before they fall. Between engagements, Lemartes is returned to stasis to protect his battle-brothers from the Rage. Some whisper that Lemartes's eventual fall to the Rage is inevitable, while to others he is a sign of hope that perhaps other Blood Angels can also master their curse.[1]

Like all Chaplains, Lemartes wears all-black power armour with a skull-visaged Death Mask and a Rosarius. He also uses a Jump Pack.[1]

His primary weapon is the Blood Crozius, an ancient Crozius Arcanum said to have been carried by the Blood Angels' very first High Chaplain, and gifted to Lemartes by Astorath.[1]