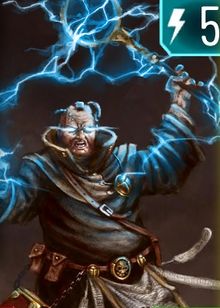 Lemuel Gaumon was a remembrancer, specifically a Societal Behaviourist [1a] assigned to the 28th Expedition Fleet under the direction of the Thousand Sons, during the Great Crusade. His natural psychic ability was identified by Magnus the Red and Gaumon later became a neophyte of the Thousand Sons under the tutelage of Ahzek Ahriman. Captured attempting to flee Prospero when the Space Wolves fleet arrived, he spent years imprisoned on Kamiti Sona[2d] before briefly becoming a daemonhost to a shard of Magnus. He then took the name Promeus[2f] and went on to become a founding member of the Inquisition.[3]

Lemuel Gaumon was a native of Terra, hailing from the Nordafrik Conclaves.[1b] Prior to becoming a remembrancer, Gaumon was a wealthy business man from Mobayi where he lived on a sizeable estate with his wife, Malika. Gaumon attributed his financial successes to his ability to read people's auras. This gave him the ability to accurately determine the truthfulness of financial offerings from other parties. When his wife became incurably ill, Gaumon refused to accept her mortality and began to conduct research outside of the mainstream. This led him to what was described as more esoteric methods of treatment. Upon the passing of his wife, Gaumon joined the Remembrancer order and petitioned to join the Thousand Sons Expedition. Gaumon commented that his reasoning for joining the Thousand Sons was their rumoured sorcerous abilities and their own history of using these abilities to cure their mutations. Gaumon reasoned that he could learn how to bring his wife back from the grave.[1e]

Gaumon was present with the Thousand Sons Legion during their investigation into the mysteries of Twenty-Eight Sixteen. It was during this time period that Gaumon's natural psychic abilities were recognized by Magnus and assigned to Ahriman for further training in the ways of the warp. Gaumon was initially reluctant to admit to possessing these abilities as psykers were not well regarded in the Imperium.[1c] He also joined the Thousand Sons during their campaign alongside the Word Bearers and Space Wolves on Ark Reach Secundus.[1d] He travelled with the fleet to Ullanor and Nikaea, however, he did not witness the activities on those planets first-hand.

During his time with the 28th Expedition, Gaumon became close friends with fellow remembrancers Camille Shivani and Kallista Eris. He also became acquainted to a degree with Mahavastu Kallimakus, the personal remembrancer of Magnus. While not on campaign, Gaumon resided on Prospero conducting research for the Thousand Sons.

Gaumon became aware of the impending invasion of Prospero by the Space Wolves after his friend, Kallista Eris, had told him of her visions of the future. After receiving the warning from Eris prophesying the destruction of Prospero, Gaumon, along with fellow remembrancers Camille Shivani and Mahavastu Kallimakus as well as Shivani's lover Chaiya Parvati, snuck aboard the mass conveyor Cypria Selene and were in the process of departing the Prospero System as the Space Wolves arrived.[1f] The ship was intercepted by the Hrafnkel and those aboard interrogated. Gaumon, Shivani and Parvati were then consigned to the Silent Sisterhood prison of Kamiti Sona.[2d]

Five years into their imprisonment, the Thousand Sons raided Kamiti Sona seeking a shard of Magnus.[2a] During the raid, Gaumon used his abilities to force a mother to kill her child in order to silence its cries and avoid detection by daemons.[2b] He was captured by the Knight-Errant Dio Promus[2e] and taken back to Aghoru in search of another shard. After Promus and the Space Wolves accompanying him were unable to defeat the shard, Menkaura, a Thousand Son also captured at Kamiti Sona, bound the shard into Gaumon as a daemonhost.[2e] After being freed from possession when Ahriman extracted the shards on Nikaea, the Rune Priest Bödvar Bjarki determined that he was "wyrd-wraith" and unable to be possessed by daemons in the future. They would take him back to the Sigillite for questions. The Space Wolves killed Promus for having killed loyal legionaries in the service of the Sigillite, and Lemuel took the name Promeus to honor him.[2f]

Now acting as an agent of Malcador, "Promeus" next appeared before Bodvar Bjarki's pack and the Salamanders trio of Atok Abidemi, Igen Gargo, and Barek Zytos during the Siege of Terra. Promeus learned of the apparent failure of the Thousand Sons to penetrate the Western Hemispheric wall section, but quickly realized that this was a ruse and that Magnus the Red had infiltrated the palace.[4] Promeus alongside his Space Marine allies confronted Magnus and his entourage in the Imperial Dungeon. After the battle Promeus honored the last members of Bjarki's pack to die before vanishing, never to be seen by the Rune Priest pr Salamanders again.[4a]

Promeus was one of the four original founders of the Inquisition. Along with Moriana, Promeus was insistent that the Emperor could be resurrected into a mortal form and became one of the earliest resurrectionists. However, after Moriana began to look to the Ruinous Powers to achieve their aim, Promeus and his disciples, now known as Promeans, battled Moriana and her forces and banished them to the Eye of Terror. Afterwards, Promeus continued to write extensively on the subject of resurrectionism, which he eventually compiled in the Book of Promeus, which itself was eventually burned by Stalia von Dressen. However, Promeus's early beliefs nonetheless had a key influence in the development of the Thorian faction of the Inquisition.[Needs Citation]