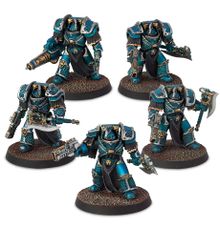 Lernaeans were elite Terminator infantry of the Alpha Legion during the Great Crusade and Horus Heresy.[1]

Unknown by the greater Imperium, Lernaean Terminators rarely left behind any evidence or witnesses of their deeds and few know of their existence. Clad in Cataphractii Pattern Terminator Armour, they were armed with Volkite Chargers and power axes which made them fierce opponents in close combat. The leader of a squad is called the "Harrower" and the squad usually deploys via Land Raider Proteus or Land Raider Phobos but can also be deployed via Dreadclaw Drop Pod or Spartan Assault Tank.[1] In battle, they advanced relentlessly upon the foe, descending with controlled fury and slaying any enemy they encountered. Having secured their objective, they stubbornly held against any counterattacks. The Lernaeans were known as the jaws of the Hydra, the bestial symbol of the Alpha Legion itself.[1]

During the Battle of the Alaxxes Nebula, Alpharius disguised himself as one of his own Lernaean bodyguards to confound the Space Wolves.[3]

The term Lernaean derives from the mythical Greek Lernaean Hydra