"I may go through three clips to your two, brother, but my death toll is twice as high." 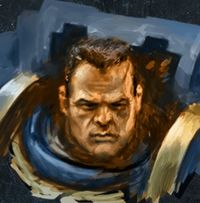 Lethus Gaiun is a Tactical Marine in the Ultramarines Chapter. He discovered that this was his true calling after mastering the weapons of the Devastator and Assault Marine. His rate of fire is astounding and each deadly bolt Gaiun fires is sent to its destination with merciless efficiency, even as he runs toward the front line. Few warriors are as deadly on the move as Gaiun, a fact that has seen him at the fore of many a victorious charge. These skills have served Gaiun well in Captain Anaton Thassarius' Company, where he fights as part of Sergeant Jaenos Sevastus' squadron.[1]