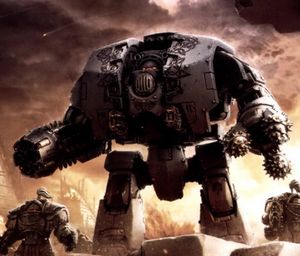 The Leviathan pattern Siege Dreadnought was a large type of Space Marine Dreadnought used during the Great Crusade and Horus Heresy by the Legiones Astartes.

Built in limited numbers during the latter days of the Crusade, the Leviathan was developed in secret on Terra without the knowledge of the Mechanicum. Its massive frame incorporates hybridised technologies, some dating back into the Dark Age of Technology. The resources to build these machines were nearly equal to that of a Knight.[2] Towering over later Imperial walker patterns, this heavily armoured dreadnought is savagely powerful.[1]

Those few Leviathan Dreadnoughts which survive into the 41st Millennium are ancient and terrible relics, rarely spoken of and rarely deployed, dreaded as much as they are revered by those Chapters that possess them. The tormented and ravaged minds of those interred within are driven to the edge of madness by the little-understood mechanisms unique to the Leviathan, trapped in dreams of the Heresy which haunt the machines themselves, and soon suffer a final dissolution owing to the terrible strain the Leviathan inflicts on those who would dare to master it. Only the full authority of a Chapter Master is sufficient to unleash these terrifying machines in war, as where they strike and what they kill is as often determined by their dark dreaming as it is the will of their commanders.[1a]

The Leviathan Siege Dreadnought bristled with weaponry, including two arm mounts that could be equipped with a combination of a Leviathan Storm Cannon, Grav Flux Bombard, Cyclonic Melta Lance, Leviathan Siege Claw, and Leviathan Siege Drill, the latter two of which would incorporate a meltagun. Its torso was equipped with a pair of Heavy Flamers or twin-linked Volkite Calivers. Additional weaponry could include up to three Hunter-Killer Missiles and/or a Phosphex Bomb discharger. Finally, it would typically be armed with frag and smoke grenades, as well as a spotlight.[1]

While the Leviathan is extremely rare today, some machines still remain in service. Most notable is Carab Culln, Chapter Master of the Red Scorpions.[4] Chaos Space Marines still use ancient Leviathan Dreadnoughts, which have since become Daemonically corrupted.[5]