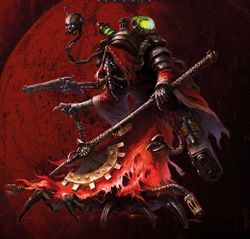 Lexell Kotov is an Archmagos Explorator of the Adeptus Mechanicus.[1]

Kotov was originally the Fabricator-General of a series of Forge Worlds. However by late M41 Kotov had been beset by a series of misfortunes. His Forge World of Arcetri was consumed by Tyranids while another, Uraniborg 1572, was lost to the Dark Mechanicus under the Heretek Votheer Tark. To compound this, Kotov next lost his Forge World of Palomar when he attempted to resurrect the buried Ark Mechanicus Speranza, which caused a violent chain reaction across the planet. While he had lost his last Forge World, he had nonetheless aquired the Speranza. This vessel was his last hope, and Kotov sought to reverse his fortunes by discovering the lost expedition of Vettius Telok and the fabled Breath of the Gods.[1]

Kotov was able to muster his remaining forces to form the modestly sized Kotov Crusade in search of Telok's expedition on the other side of the Halo Scar.[1a] After a long and difficult journey in search of Telok, the remaining elements of the Crusade managed to reach the world of Exnihilo and Kotov came face to face with Telok.[2] However it soon became apparent that Telok had become mad and intended to use the Breath of the Gods to destroy Terra and Mars in order to rule as the new Emperor.[3] Accepting help from the Eldar of Biel-Tan under Farseer Bielanna Faerelle, Kotov and Telok's forces engaged in a vicious battle over Exnihilo.[3a] The final battle took place aboard the Speranza itself as Telok attempted to gain control of the semi-sentient vessel in order to use it to reach the Sol System with the Breath of the Gods. Kotov and Telok engaged in a digital battle of the minds aboard the Speranza's system. Thanks to Kotovs allies and the Speranza itself siding with him, Kotov was able to purge Telok's mind and prevail.[3b]

In the aftermath of the battle nearly all of the Humans and Eldar of the Kotov Crusade were now dead, but Kotov and the survivors were able to limp back to Imperial space with the Speranza. He returned to Imperial in search of new beginnings.[3c]