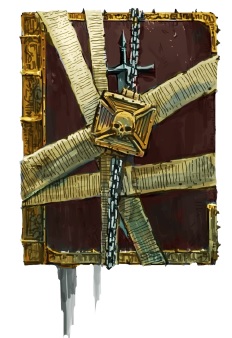 The Liber Daemonicum (aka Libra Daemonicus[1]) is the Grey Knights Chapter's sacred book that contains prayers, battle rituals, litanies, funeral rites, and Chaos lore. Inquisitors of the Ordo Malleus are also known to posses copies of the book. While it may appear to be a normal book, opening it will reveal a series of flickering paper-thin screens that contain interactive information that can be brought to focus or enlarged. Page after page discusses tactics and how to fight the denizens of the Immaterium, as well as, listing the True Names of a great many Daemonic entities; information collected from the Librarium Daemonica, the repository of dangerous knowledge pieced together by the Ordo Malleus over the millennia. The book pulls no punches; it includes an extensive discourse of when to terminate compromised allies and a whole chapter discussing the moral implications and appropriate use of Exterminatus.[2]

Each Grey Knight fights with a copy of the book displayed in a beautifully decorated ceramite case fastened to his breastplate or hanging from a chain around his neck. It contains exactly 666 words. The book is also represented in Grey Knight iconography, on the chestplate and pauldron of both power armour and Terminator Armour. It is a symbol of the greatest weapon against the forces of Chaos - an unshakable faith in the Emperor of Mankind.[Needs Citation]