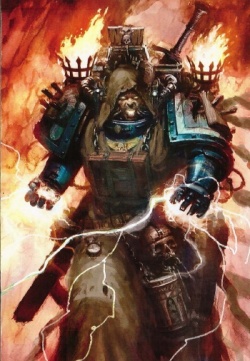 Librarians are Space Marine psykers. They fulfill several important specialist roles in a Chapter: off the battlefield they are responsible for interstellar psychic communications. In battle they utilise their abilities as powerful psykers. They are among the most knowledgeable of the Chapter's history and traditions.[1][3] 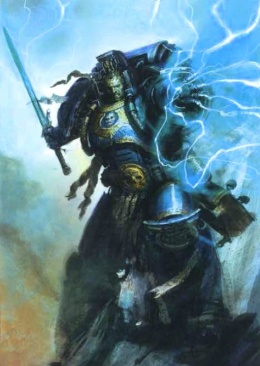 The earliest known Space Marine battle Psykers were the Host of Pentacles of the First Legion during the Unification Wars. However these warriors suffered from many grim calamities and in time the project was abandoned.[23]

Space Marine Battle Psykers reappeared during the Great Crusade. The early history of the Librarians is chequered with mistrust and intrigue. Initially the Legions made no use of psykers within their ranks, however Magnus the Red, Sanguinius, and Jaghatai Khan proposed the Librarian program, allowing the Thousand Sons to train and create Librarius departments in a variety of Legions.[10] Librarians were favoured for use or have been seen within the White Scars, Night Lords, Ultramarines, Thousand Sons, Word Bearers, Salamanders, Alpha Legion[17], Dark Angels[15], World Eaters[18], and Raven Guard[19] Legions. Some of the Primarchs were against using psykers in the Space Marine Legions at all, or at least within their own Legions. Legions that did not favour their use or employ them were the Iron Warriors, Space Wolves, Imperial Fists, Iron Hands, Death Guard[17], and Emperor's Children[16].

The first Librarian experiments were sanctioned by the Emperor. They were seen as a good way of controlling the random development of psychic powers among Space Marines. Magnus and his fellow pro-psyker Primarchs then asked the Emperor to allow recruitment of psychic individuals into the ranks of the legions. The Emperor accepted, and the Librarians became some of the most loyal troops to the Emperor. The debate over Librarians came to a head when Mortarion, Leman Russ and others accused Magnus of sorcery. The Emperor summoned a meeting at Nikaea in an effort to provide a final resolution to the Librarian issue.[2]

The Emperor's decree following the Council of Nikaea banned the use of psychic powers, demanding the systematic dismantling of all Legion's psychic corps and redistribute them back into the battle companies as standard troops. Further, the Emperor threatened any who contravened his order with heavy censure and summary destruction.[10] How this decree was amended Post-Heresy is not known.[Needs Citation]

All potential recruits into a Chapter are scrutinised by Librarians for psychic ability. Those with psychic powers undergo judgment that divides them into those who will join the Chapter as Librarians, and those who are so weak in power or character that they would present a danger. Worthy psychic candidates are passed on to the chapter Librarium for training.[1] The rate of attrition is the greatest for psychically gifted candidates, as they must not only be strong enough to survive the training that the normal candidate must undergo, but possess the mental strength to endure the shaping of their minds and to fend off the daemons and entities of the Warp who see the strong form and mind of a Librarian as a great prize.[Needs Citation]

During their training they must hone their psychic power as well as gain some measure of protection from the predators of the warp. The greatest danger psyker recruits face is the loss of their very sanity.[1]

Once a psyker has completed his training, he will be allowed to join the Librarius as a Lexicanium and can then rise through the ranks, becoming a Codicier, Epistolary and eventually Chief Librarian. His duties include interstellar communication and screening potential recruits for psychic abilities.[1]

Librarians are often treated with distrust due to their nature. Marines are taught to hate the deviant and abnormal, particularly mutants and those with psychic powers. This creates a gulf between the Librarians and the rest of the chapter brethren, though the powers they can bring to bear on the battlefield makes them always welcome in combat.[1]

On the battlefield, Librarian psychic powers often manifest in useful, and often destructive, ways. These can include anything from projecting energy bolts to erecting powerful protective fields. The more powerful Librarians tend to use their powers in more subtle ways, stepping out of time for a moment to anticipate their enemy's next move or redirecting bullets away from friendly targets. To aid them in using these powers, and protecting themselves, Librarians wear psychic hoods. These devices incorporate psychically-nullifying crystals which provide defence against enemy psychic attacks. They are often armed with force weapons, which only Librarians and other psykers can use to full effect, channelling their powers through the weapon.[1]

According to the guidelines of the Codex Astartes, the armour of Librarians is blue with gold and yellow highlights, regardless of chapter colours. The left shoulder plate of the Librarian's armour displays the chapter symbol in the case of power armour; for Terminator armoured Librarians, the chapter symbol is displayed on the right shoulder armour (leaving the Crux Terminatus for the left). The free shoulder pad displays the Librarian symbol, its exact form denoting the rank of the Librarian. Librarians wear golden yellow tabards which are edged with black patterns, the complexity of the pattern denoting the Librarian's rank.[Needs Citation]

Their equipment is often heavily ornamented by artificers of the chapter due to the heroism and valour shown by the Librarians, making every piece individual.[5] 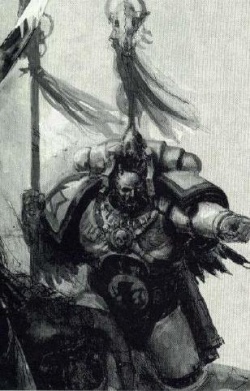 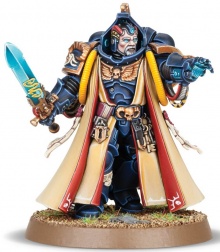 Several Chapters have different names for Librarians, who vary subtly in their methods and their role in the Chapter hierarchies.

Some chapters do not use Librarians at all, such as the Black Templars[7] and the Marines Malevolent[Needs Citation]. Others revere Librarians greatly:

Librarians also exist among the new Primaris Space Marines. Primaris Chapters seem to use the same ranks as their standard counterparts.[20]