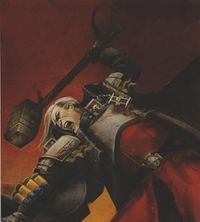 Libricaranism is a Radical ideology of the Inquisition. The Libricars are punishers to the extreme and seek stability at any price, often undertaking large-scale purges and Exterminatus at the slightest whiff of corruption. Unlike many of their Amalathian cousins, they will target any member of Imperial society regardless of how prestigious or high-ranking a target.[1]

A newer sect within the Inquisition, Libricaranism grew out of the Puritan Amalathian ideology. Libricars maintain that it is not enough to preserve the institutions of the Imperium, but also necessary to ensure that those who rule and maintain them are ceaselessly watched, mercilessly judged, and violently purged.[1]

The Libricars were formed in the aftermath of the "Slighting Wars" that erupted in the Ptolemaic Reach and Crassan Sub-Sector in the 430s.M41. Corruption and feuding among the nobles of the Crassan Sub-sector resulted in 300 years of war that was only ended through the intervention of Battlefleet Obscurus. The resulting damage saw a near stand-still of trade for a decade. All of these factors led to the failure of other efforts such as defeat in the Meridius Crusade and Waaagh! Heart'rippa. in the aftermath, the task of rooting out the guilty fell to the Amalathian Inquisitor Claudia Tarshek. She undertook a 11 year purge, overseeing some 300,000 executions and she became sickened by the corruption she witnessed. Soon the purges became out of control, and she began to re-visit and re-purge worlds that had already been cleansed, killing on the basis of only perceived insult or heresy. When she began to target Adeptus Terra and other Inquisition officials in the region, matters came to a head. Her Lunar Class Cruiser Magera suffered a mysterious reactor failure and the Inquisitor was killed.[1]

Though she died, Tarshek's legacy lives on. She has proven a martyr for many who share her views, and several Inquisitors have adopted her mantle.[1]