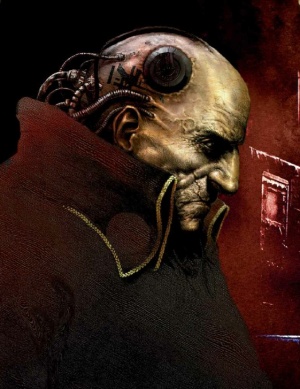 Lichtenstein is a renowned Radical Inquisitor. Having since been declared Excommunicate Traitoris, he is currently being actively hunted by one of the most renowned Witch Hunters of the Imperium, Tyrus.[1]

Lichtenstein has a single-minded obsession with the artifact known as the Liber Heresius that freed the Daemon Prince Phara'gueottla from its prison on Karis Cephalon. Since then, his fate has been inextricably tied with that of Tyrus, the Daemon, and the ex-Daemonhost known as Kessel. These three clashed on Karis over the manifestation of the Daemon Prince on the world of Paganus Reach and again at Cephalon Spaceport where Lichtenstein managed to break Kessel free from Tyrus' custody. In return, Kessel gave Lichtenstein safe passage to Equinox, a world where, under the false name of Thravian Flast, he searches tirelessly for the true location of the Liber Heresius.[1]

Now a very old man, his strength of will allows him to continue on with his mission. While many have dismissed him as mad and traitorous, he sincerely believes that he is on a quest to save mankind from enslavement at the ends of an ancient mechanical race who worship death. Since no one believes him, he has vowed to do it himself. He knows that within the Liber Heresius is a powerful weapon, proof against these ancient killing machines. Lichtenstein will do anything, including harnessing the powers of Chaos, to obtain it.[1]