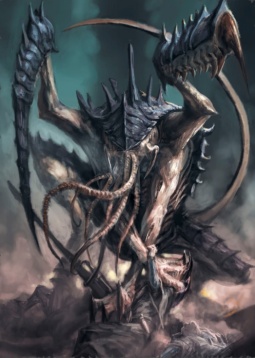 Lictors are Tyranid creatures that act as specialist scouts and vanguards, roving ahead of the Tyranid swarm to seek out and locate potential prey.[1]

Lictors are masters of stealth and can move swiftly through even the densest terrain without any sound. They are covered in a Chameleonic Skin that changes colour to blend in perfectly with their background and renders them all but invisible to the naked eye. They are not instinctively aggressive, like other Tyranid creatures, but are opportunistic hunters that will stalk their prey from the shadows, avoiding situations where they would be outmatched, until they choose to strike. They will often pick off their prey in ones and twos while they are separated from reinforcements. Lictors have in fact been known to wait motionless for days, completely unnoticed by their victims, until the right time to strike.[1]

Lictors are armed with mantis-like claws, Scything Talons, Flesh Hooks, and Feeder Tendrils which are tipped with sharpened bony plates strong enough to pierce a victim's skull and are used to lobotomise victims and devour their brain. From a victim's brain, Lictors can absorb their memories, and so learn the position of enemy forces or any weaknesses that the Tyranids could exploit.[1]

Lictors appear to be a specialist mutation of Tyranid Warriors and are highly adapted to survive in hostile environments and a stalker/predator role. They are perfectly evolved for their role, having a wide number of specialist traits. These include a bladder of super-nutritious fluid to allow it to forego the need for nourishment, chromatic microscales that gives it a chameleon-like ability to blend into its environment, pheromones that block any scent it may give off, deformable organ clusters that allow it to change its shape somewhat and mimic rocks or vegetation, vibration-absorbing hoof hair arrangements to allow it to move near silently, chitinous plates to lessen its air disturbances as it moved, body heat dampeners, and even brain casing to disguise its electromagnetic brain waves . Contrary to Imperial belief the Lictor is not a true species of individuals but rather a single entity reincarnated and reproduced countless times over. Like a Hive Tyrant, every Lictor inherits the memories and experiences of all other slain members of its species. They are a single will directed by the Hive Mind.[9]

Despite their large size, Lictors are very agile and fast, able to outmaneuver nearly all other enemy units. It is with this speed, coupled with their strength, that Lictors strike from hiding, taking their victims entirely by surprise and unable to react in time. They are intelligent and possess highly developed sensory organs so they can see, smell, hear and taste their prey long before it becomes aware of their presence. They stand far taller than even a Space Marine. They are also known to be the only Tyranid species that will stalk its prey before killing.[1]

Lictors exude a pheromone trail as they locate and hunt their prey which draws other Tyranids to the area. A larger concentration of prey stimulates a stronger pheromone response and so brings a larger group of trailing Tyranids. So even if a Lictor is discovered and killed by the enemy, it doesn't guarantee safety as other Tyranid creatures are likely already on their way.[1] 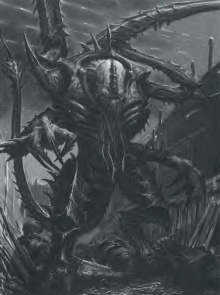