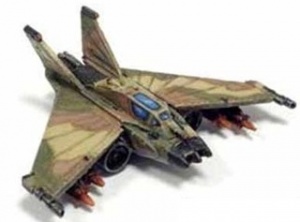 The Lightning 'Strike' is a variant to the Lightning air superiority fighter which has been modified to fulfill a ground-attack role.[1a]

The main difference between the Strike variant and the original is its weapons loadout. While it retains the twin-linked Lascannons mounted on the wing tips, the Strike removes the long-barreled ventral-mounted autocannon for two additional hardpoints, which carry either two Hellstrike Missiles or two Bombs. It also retains the four wing hardpoints, allowing it to carry four additional Hellstrikes or bombs, four Hellfury Missiles or six Skystrike Missiles. Like the Lightning it can also mount additional equipment.[2]

Lightning Strikes are used purely for dedicated ground attacks, primarily targeting enemy armor formations. During major operations in conjunction with the Imperial Guard, a 'taxi rank' of Lightnings will circle the battlefield awaiting requests from Guard commanders for assistance. Once received, the Lightning Strike will then swoop down on the enemy target and destroy it before climbing back into the rank to await the next request.[1a]