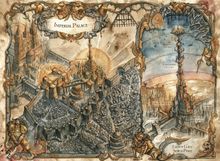 The Lion's Gate Spaceport is a major transportation hub of the Imperial Palace on Terra.[2]

Located near the Lion's Gate, which connects the Inner and Outer Palace complexes[2], the Lion's Gate Spaceport is the greatest transportation facility on the Throneworld. A massive structure, the Lion's Gate Spaceport goes into the upper atmosphere of Terra and contained an immense number of docking yards and space elevators capable of receiving even a Gloriana Class Battleship.[3b][1][5] The outer portion of each layer of the Spaceport, up to about a kilometer deep, were called the skin; this gave way to the mantlezone around the innermost ten kilometers, which itself was known as the core wards, or just the core.[5]

During the Siege of Terra the Lion's Gate and its adjacent Spaceport were the most heavily defended locations of the Imperial Palace.[3a] Its defenses included over 18,000 Imperial Fists and 800,000 Imperial Army troops under the command of Fafnir Rann.[5] Despite this, during the siege it fell to a combined assault led by Kroeger, Abaddon, Kharn, and Perturabo.[5a] However, later the Spaceport was reclaimed by the White Scars and 1st Terran Tank Division of the Imperial Army in a daring raid led by Jaghatai Khan.[4] Today, the facility is still in use.[2]