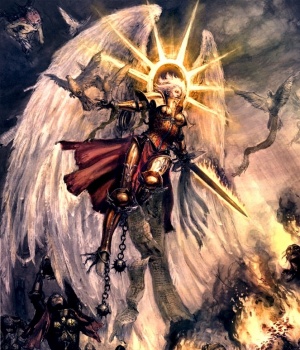 Saint Celestine of the Adepta Sororitas

A Living Saint is a mighty and pious warrior of the Imperial Creed who displays miraculous abilities within his or her lifetime and is subsequently resurrected, supposedly by the Emperor himself. Living Saints are most often members of the Adepta Sororitas but some have come from the Imperial Guard.[1]

Living Saints are exceptionally rare beings proclaimed heroes by the Ecclesiarchy. Their piety and faith to the Emperor has often led to their martyrdom, which is rewarded upon death with resurrection. However, instead of mere revival, Living Saints become infused with a holy and terrible aura that is a wonder to behold. A Living Saint becomes the manifestation of the Emperor's might on the battlefield, serving to boost morale in addition to their formidable combat prowess. Due to their strong faith in the Imperial Creed, many Living Saints hail from the Adepta Sororitas whilst others have been heroic Imperial Guardsmen.[1][2]

Living Saints are a notoriously brief phenomena, their holy power burning out as quickly as it appeared. As such, they usually appear in times of great need for the Imperium, often revealing themselves at the forefront of a War of Faith or Crusade. Examples of this include Saint Sabbat and Saint Celestine.[1] Others are simply extremely powerful and/or holy. Only a few Living Saints are confirmed in a millennium, and they are all revered throughout the Imperium. For an individual to be declared a Living Saint, a conclave of the Ecclesiarchy and the Inquisition must agree that the subject is pure and the reason just.[2]

Many Sororitas vie to become Living Saints and undertake arduous tasks to achieve this. These individuals are known as Saint Potentia.[7]

Living Saints are among the mightiest beings in the Imperium, said to be blessed by a portion of the God-Emperor's power. They are often able to decimate foes with psychic blasts of holy fire and gifted with an Inviolable Aura which allows near-invulnerability in battle.[4][2]

Many Living Saints can also conjure angelic wings, allowing them to bring righteous death from the air. Death itself is not permanent for a Living Saint as they can be resurrected should the Imperium ever need their help again. Although the process is extremely difficult and can be stopped, such as with Saint Gerstahl.[4][2]