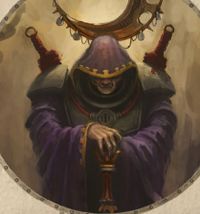 These stoic and patient warriors are capable of deadly acts of agility and stealth much like a Lictor, capable of even matching a Eldar Exarch in combat prowess. This makes them excel in the role of a bodyguard and are known to thwart assassination attempts with the mere force of their presence. In their role as a sentinel, the Locus can stand on guard for hours motionless and unblinking but always on full alert. Twin blades are the preferred weapon of the Locus, by are not their only one. They have hidden limbs tucked away into their robes as well as long segmented tails tipped with a toxic stinger. To witness a Locus in the midst of full combat is to see a shrieking, limb-lashing monstrosity erupt from the facade of serenity. Once the enemy is slain, a Locus will swiftly dress itself in its robes once more and regain their calm composure in an instant.[2]

Each Locus carries a Neurotraumal Rod that is no simple staff but instead a complex neurological transmitter crafted for them by their Magus and Clamavus. It sends out destabilizing frequencies designed to upset synapses and thought waves. When a Magus goes to "negotiate" with a particular powerful enemy such as Cardinal or Inquisitor, the Locus' accompanying it will send out waves of mental disruption that induces brain-spasms, migraines, and harrowing visions in its victims.[2]

When not serving as guards, a Locus acts as his Magus' eyes, ears, and blades. The presence of a Locus is also able to expand the psychic influence and range of their Magus.[2] 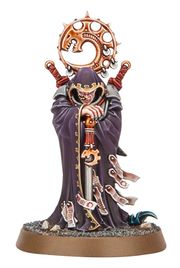