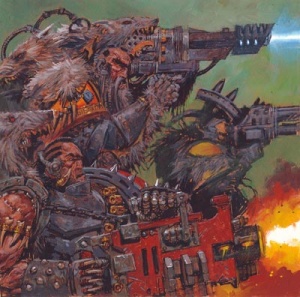 Long Fangs are the long-ranged heavy weapons specialists of the Space Wolves, comparable to the Devastator Squads of other Space Marine Chapters.[1a]

In a typical Codex Chapter, Space Marines are first assigned to a Devastator Squad after completing their initial service with the Scout Company. Only after mastering both aspects of war are such Marines eligible for promotion to a Tactical Squad.[2]

Among the Space Wolves, by contrast, only the most senior and experienced Marines may be promoted to the ranks of the Long Fangs. The teachings of Russ hold that only warriors such as these can be entrusted with the chapter's long-ranged heavy weapons, each of which is a relic in and of itself, incredibly rare and sometimes irreplaceable.[1a] Likewise, only warriors who have served their time in the furious close-combat assaults of the Blood Claws and the more deliberate actions of the Grey Hunters, are wise enough in the ways of battle to know exactly how to deploy this kind of firepower to assist their brothers.[1a]

By the time of his promotion to the Long Fangs, a Space Wolf has served and fought for centuries, and the Canis Helix — the unique component of the Wolves' geneseed — has completed its final effects, and the Wolf's elongated canines have grown to their fullest length, strong enough to dent plasteel.[1a]

The origin of the Predator Annihilator was borne out of necessity, during the Skarath Crusade in M36. A Space Wolves Great Company found themselves surrounded by Traitor Legion forces, unable to bring their Lascannons to bear on superior numbers of tanks and Chaos Dreadnoughts, not without suffering considerable damage from the hail of fire the enemy was able to lay down. To counter this, the Long Fangs and Iron Priests ripped the Autocannons out of their Predator tanks, and replaced them with the Long Fangs' Lascannons. The protection afforded to them by the tanks' armoured hulls enabled the Long Fangs to get within range of the enemy armour, and to eventually destroy them.[3a]

The Adeptus Mechanicus was dismayed that their precious STC tanks had been modified, but has since approved of the modifications[3b], and other chapters started following suit not long after, retro-fitting some of their Predator Destructors' armament with Lascannons. Thus the Annihilator variant had come to pass, and it continues to serve as the main Space Marine anti-vehicle tank.