"Wot, this? Naw, I've had this fer ages. Of course the paint's still wet, it's me favourite. Sell it to ya if you like. One careful owner."
- 'Fingaz' Rutzeg, Deathskull Loota.[6] 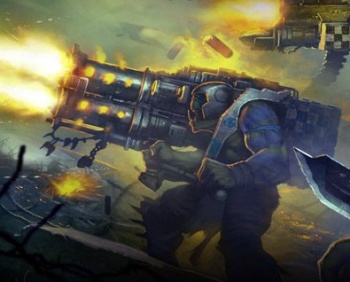 Lootas are thieving Orks who use stolen weaponry for creation of their fearsome Deffguns and fulfil the role of heavy support on the battlefield.

Lootas are the thieves and scavengers of Ork society - light-fingered villains who will pinch anything that isn't nailed down. No one can feel safe around a mob of Lootas - a brief scuffle with a Loota over a stolen thing will most often result to the previous owner finding his lunch, his Slugga and his golden teef are mysteriously missing. Some of them are so efficient, they can even loot enemy vehicles. However, Lootas are also very open-minded about their posessions. If an Ork is skilled enough to be able to steal anything from a Loota, he won't claim his posession (at least not when the thief is looking) - he stole it fairly, after all. Some Lootas insist that 'sharin' is an essential part of Ork Kultur, but most Orks insist that Lootas are a bunch of thieving skumbags, with no more honour than a baked squig.[1a]

They play an important role in Ork society, being able to find all the needed bitz for Mekboyz' latest "projekt". Meks see them as top-class customers and salvage workers. Because of it they are often found in Big Mek Warbands. Many Lootas are also affiliated with the Death Skulls clan who, being a dangerous band of grubby-fisted thieves, welcome their Loota brethren with open arms.[1a][2]

As a result of their attitude, Lootas tend to become pretty rich by Ork standards. They trade the best items in their possession for more and more powerful guns. Their main weapon is a Deffgun, a heavy shoulder-mounted gun, usually made by some known Mek from weaponry that the Lootas managed to steal or gather on the battlefield. In battle they gather in mobs, providing fire support with their deadly weaponry, sometimes accompanied by Meks, who want to see how their creations perform in battle. After the fight is over they scavenge the battlefield and strip weapons, armour and equipment from their enemy's dead, before selling the gear to the Mekboys.[1a][2][5]