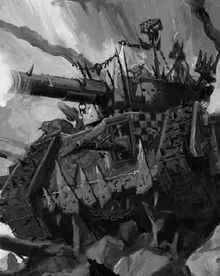 Looted Wagons are enemy vehicles which the Orks have wrecked and are salvaged by Lootas and taken to Meks to be rebuilt.[1]

Once Looted, the Orks will add 'Kustomisations' that are as likely to damage the Wagon as it is to damage the enemy.[1] Though less efficient than their previous incarnations, they wills till see widespread battlefield use.[3]

Looted Wagons are popular with the Death Skulls tribe who are very good at "liberating" vehicles. Death Skulls like to loot a vehicle, repair it, then use it on the enemy in the same battle. There is a legend about a Loota Called 'Grabber' Gutzbag who could loot Imperial Titans. Blood Axes also like looted wagons and use them to infiltrate Imperial Guard positions.[1]

Looted Skorpius are only piloted by Grots, as no self-respecting Ork would ever hover into battle.[9]