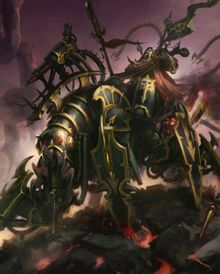 Lords Discordant are Chaos Lords who have an arcane mastery over machinery, similar to Warpsmiths, which they use to enhance the powers of Daemon Engines; they can also cause nearby machines to glitch and seize by bellowing profane litanies.[1]

The mere presence of a Lord Discordant is able to short-circuit machinery, shut down augurs, cause servos and actuators to fail, and corrupt Machine Spirits. Their Helstalker mounts use Magma Cutters to force slice open a vehicle they have pinned while their enormous Hypno-Armour Syringes inject scrapcode and Daemonic dataphages directly into the machine's circuitry. A Lord Discordant can hear a machine's pain, feeling its struggle to reroute vital functions to maintain system integrity. Should the need for close combat arise, the Lord Discordant himself lunges forward with a massive Impaler Chainglaive and Mecha-tendrils.[2]

The Helstalker Daemon Engine mounts of a Lord Discordant are no less nefarious, able to parasitically devour the Motive Force of its mechanical prey be it Imperial or Xenos in origin. As it does so, its own metallic frame swells with ingested code and subroutines. The Lord Discordant siphons off the pained spirit of the dying technology. This harvested energy is then used to reinvigorate other Daemon Engines, or is released as beams to infect the systems of other vehicles. Even after the foe has been beaten, a Lord Discordant continues to prowl the battlefield, searching through wreckage for a sliver of Motive Force that may remain. When such remnants are found, their energy is swiftly cannibalized. Captured Machine Spirits are ceaselessly experimented on, twisting them into myriad data configurations for different horrific effects.[2]

Lord Discordants are found across the entire Chaos pantheon. Those lords devoted to Khorne make motivators seeth with burning rage and transmute lubricating oils to blood. Tzeentchian Lords Discordant cause vehicles to twist themselves through unseen dimensions, crumpling them into impossibly small heaps of slag. Nurgle Lords cause vehicles to vent internal gasses, while their outer plating sloughs off like a diseased scab. But perhaps most disturbing of all is the ability of Slaaneshi Lord Discordants to rewire machines to feel constant and excruciating pain.[2] 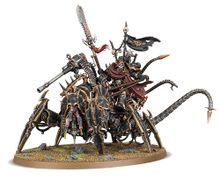