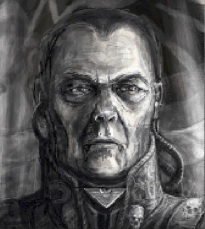 A rank below Fleetmaster which commands Indomitus Crusade Battlegroups.[26]