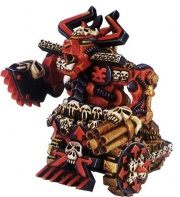 A Lord of Battles (Epic Scale)

The Lord of Battles is a colossal Daemon Engine of Khorne.

Though Khorne despises the use of magic as a weapon unfit for a warrior, he does not rely solely on swords and axes to collect skulls - technology and even sorcerous weapons are also utilised to increase the tally of the fallen. The Lord of Battles is a fearsome fusion of machine and Daemon, comparable in size to a small Titan. It is a towering construction of black iron and brass in which a Greater Daemon of Khorne is bound.

The Daemon Engine is also inscribed with Runes of the Blood God, granting it added defense against psychic powers.

The Lord of Battles is armed with two of the following arm mounted weapons:

In addition it is equipped with a head-mounted cannon (and in previous versions hull-mounted firethrowers).