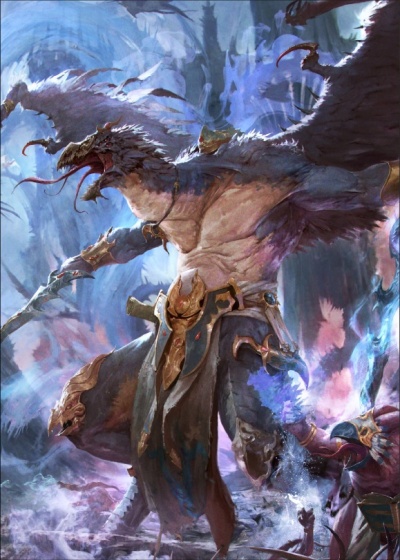 Lords of Change, more fully known as the Watching Lords of Change and also as the Eyes of Tzeentch and the Feathered Lords, are the Greater Daemons of Tzeentch.[1] The most powerful servants of their master, Lords of Change are in many ways essentially minor embodiments of all the characteristics of Tzeentch, renowned for their long-running and intricate schemes that weave across time and fate.[3]

Lords of Change are notable for being allowed access to Tzeentch's very own reserves of wisdom and for essentially being expressions of his cunning, which gives them great power. As individuals, they are all said to possess the attitude of wicked children; playful but mischievous and even openly malicious towards the lesser beings they delight in manipulating. Nothing is more pleasing to a Lord of Change than to break open fate and re-shape it, be it by manipulation of individuals or direct action. Even without access to Tzeentch's knowledge of fate, they are said to be deeply intelligent and understanding of life's mysteries.[1]

They are powerful sorcerers and resourceful manipulators who appear to mortals as omniscient beings. Their magical abilities are so strong that the most powerful sorcerous incantations of mortals are reckoned to be but simple tricks to a Lord of Change. They are said to be able to turn scores of men into boneless spawn at a mere glance, destroy an armoured vehicle with a flick of a finger, or wrench the soul out of even the mightiest warriors with a simple word. For nothing is made that cannot be unmade, or changed, and such areas are the domains of the daemons of Tzeentch. Furthermore they are capable of seeing the near future which allows them to predict their foes' and allies' every move. Confrontations with these Greater Daemons almost always occur with their foreknowledge; getting the drop on a creature that is an embodiment of the Master of Destiny is unlikely.[3] Thus a Lord of Change can only be defeated when it is part of one of Tzeentch's grand schemes, when he tricks his own Daemon by sending it false visions of the future.[2a]

While not averse to warfare, Lords of Change typically do not engage in direct battle. This is not due to cowardice or any other emotion irrelevant to a daemon of the warp, but because it interests them more to direct the forces of combat from afar, guiding or even ordering combatants rather than fighting themselves. Because of this, it is not unknown for Lords of Change to possess powerful underlings, bands of Horrors and even Chaos Champions of their own. Nevertheless, they are potentially deadly opponents, as even without their vast sorcerous abilities, their knowledge of fate and the future makes them appear unable to be defeated.[1]

Indirect action is their preference; manipulating things from the shadows. Minor heretics, dedicated cults, revolutionaries, the actions of Planetary Governors, Inquisitors and even other daemons have all been the victims of the subtle manipulations of a Lord of Change. Those who become playthings of the Feathered Lords often have no inkling of that what is happening to them is all part of a manipulative scheme of a daemon, and even if they do learn of it, to attempt to escape from the clutches of a Lord of Change is to wander through a mist of deception and lies, unsure of the firmness of one's convictions.[3]

Gangly, winged and feathered like a bird, Lords of Change are actually most notable for their gaze; walking portals to the mind of Tzeentch, their eyes are gateways to the madness of fate; few mortals can withstand the gaze of a Watching Lord. The Lords of Change are able to perceive the hopes and dreams of individuals they look upon, as well as read the possibilities awaiting them. Often appearing multi-coloured in hue, Lords of Change actually have no default colouration and take whatever shades please them at any given time.[1] Lords of Change typically choose to appear physically frailer than they actually are, taking on wasted, cadaverous forms and seeming to need staffs to hold themselves up and walk around; this is one of their trademark deceptions, as Lords of Change possess iron-hard skin and blindingly fast reflexes, as well as sharp claws and a beak. Their interest in wisdom also endows them with the ability to draw on the knowledge of all known fighting techniques and battle strategies. Essentially impossible creatures, few who gaze on these prism of warplight emerge with their sanity intact.[3]

Lords of Change go into battle with a Staff of Tzeentch and a Baleful Sword.[20] 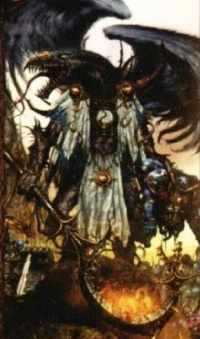 A Lord of Change