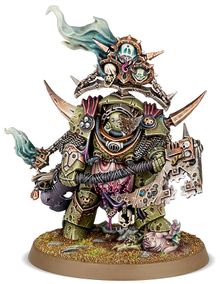 A Lord of Contagion

Lords of Contagion are powerful Nurgle-tainted Chaos Lords of the Death Guard.[1]

The most aggressive and belligerent Lords of the Death Guard take up the Mantle of Contagion, a philosophy of Mortarion based around the application of relentless advance. Lords of Contagion lumber into battle in Cataphractii Terminator Armour, wielding either giant Plaguereaper Power Axes or Manreaper Scythes. They tend towards direct strategies with little in the way of cunning or subtlety and are pugnacious commanders, supremely confident in their followers’ ability to absorb the worst the enemy can throw at them and still prevail. They embody the swift-spreading plague that tears through a crowd, killing indiscriminately and leaving mounds of bodies in its wake.[2]