From Warhammer 40k - Lexicanum
(Redirected from Lord of the Flies)
Jump to: navigation, search 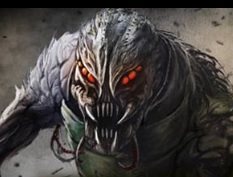 Solun Decius as the Lord of the Flies[4]

Solun Decius was a member of the Death Guard Space Marine Legion.

Decius was the youngest member of Battle-Captain Nathaniel Garro's Command Squad, and had a hard and determined edge to him that seemed out of place on such a young countenance. Nevertheless, his eyes were bright and he was often awash with excitement at the possibility of earning glory for his Primarch. Decius favoured quickly closing to engage hand-to-hand with the enemy, instead of the customary Death Guard habit of a methodical, gun-line assault. His weapon of choice was a Power fist; he was particularly adept with the brutal weapon. Decius was loyal to Garro, and did not join the warrior-lodges that existed inside the Death Guard as a result of Garro's expressing his disapproval of the lodge[Needs Citation].

Decius's life was saved by Battle-Captain Garro on Isstvan Extremis, when Garro pushed him out of the path of the attack of a Warsinger. Decius and the badly-wounded Garro then fought back to back amidst a swarm of enemies until the conclusion of the battle[Needs Citation].

As a member of Garro's command squad, Decius was fated to be aboard the frigate Eisenstein when Garro took control of the vessel and fled the Isstvan system in an attempt to bring the Emperor a message of Horus' treachery[Needs Citation].

During the flight of the Eisenstein Solun took part in what was possibly the first battle against Plague Marines. Despite killing a great number of his reanimated, traitorous former comrades, Solun was finally laid low by an attack from a plague knife. In a final act of defiance Solun cut off his own arm in a vain attempt to halt the rampant infection attacking his body, a disease now known as Nurgle's Rot[Needs Citation].

After his injury Solun was confided to an isolation bay while Apothecary Voyen tried to find a cure for his ailments. Even on transfer to Rogal Dorn's flagship, the Phalanx, no cure could be found[Needs Citation].

Lord of the Flies

Later, after completing their journey to the Terra system, Solun and his fellow Death Guard loyalists were held in a fortress of the Silent Sisterhood, located in the Somnus Citadel on Luna. Here Solun finally gave in to the power of Nurgle, allowing his corrupted body to be mutated into a daemonic entity, known as the Lord of the Flies. His body was twisted, having an arachnid-styled face with many eyes and mandibles for a mouth; his amputated hand had been remoulded into a bony, sharp appendage and his daemonic form had a swarm of insects surrounding him which healed injuries inflicted on him.[1x]

In this state Solun killed two of his brother marines who were standing vigil over his prone form. Later, after killing many of the other people in the Sisterhood's care, Solun was finally slain on the surface of Luna by Captain Garro, his former captain and mentor.[1x]

Much later in the Heresy shortly before the Siege of Terra the voice of Solun Decius appeared to goad Garro and his Knights-Errant during a purging of Chaos Cultists on Terra. Decius admitted that he had been consumed by the Lord of the Flies, and that now remained was a Daemon. This creature later revealed that he now possessed the body of Meric Voyen, forcing Garro to put down yet another friend. However after Decius' death, the Lord of the Flies then took over the body of Macer Varren. Varren was able to kill himself rather than be controlled by the Daemon, but the creature continued to battle with Garro and Garviel Loken. However shortly after Malcador the Sigillite appeared and atomized the Daemon with nuclear fire. Malcador states that despite his victory, the Daemon did not experience a True Death.[3]

In an attempt to rid himself of Nurgle's Rot, Decius cut off the hand inside his power fist; he did not succeed. The power fist was thought lost, but was recovered later in Subsector Aurelia by the Blood Ravens during the Second Aurelian Crusade. Known as the Mephitic Perdition of Flies, it was still a potent weapon, but infested with Nurgle's power.[2]