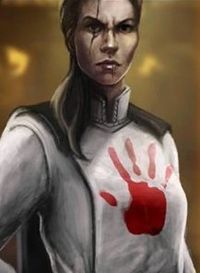 Lotara Sarrin was a naval officer of the Imperium during the Great Crusade and Horus Heresy.

The commanding officer of the World Eaters flagship Conqueror since she was 30, Lotara was one of the youngest ship officers in the Imperium. Despite her regular human status Lotara had a degree of respect within the World Eaters, wearing their bloody hand honor emblem and being on somewhat amicable terms with Angron himself. After Lotara complained about Remembrancers aboard her ship, Angron immediately had them expelled. During the Heresy Lotara stayed committed to Angron and commanded the Conqueror during the Shadow Crusade.[1]

By that time of the Siege of Terra however, the Conqueror had fallen under the influence of Khorne, which had led the flagship to become a hostile environment to those aboard it. This led to the rapid depletion of supplies and manpower - chiefly due to the World Eaters losing themselves to mindless rages and then attacking anyone near them. This soon led Lotara Sarrin and the Destroyer Sergeant Skane, Maruuk, and others to form a group to try and escape the vessel. They secretly met many times, as they knew their actions would be viewed as a mutiny against their Legion. During their last meeting, Maruuk repeatedly questioned what the group planned on doing about Kharn, as Maruuk knew they would be killed if he learned of their plans, but Sarrin assured the Captain that she would take care of Kharn, when the time came. After that meeting, their plans were finalized and their escape began, the next time the World Eaters' fleet exited the Warp.[3]

As per their plan, Captain Sarrin had secured five shuttles to take the escapees to the Legion frigate Bestiarius and one by one they were filled and left the Conqueror behind. Maruuk and Skane however stayed beside Sarrin, who as Captain of the Conqueror would need to escape aboard the last shuttle, to avoid arising any suspicion. When they reached the shuttle though, Kharn confronted them before they could escape and declared them to be traitors. A battle erupted, and as the shuttles made their escape to the Bestiarius, the Conqueror suddenly fired upon them. Soon only Maruuk's shuttle remained, as the others had been reduced to scrap, and he realized that Sarrin was not aboard his shuttle. Rage then filled the Captain, as Maruuk knew that she was responsible for the destruction of the shuttles and his life was now at an end. Despite this, Maruuk contacted Sarrin aboard the Conqueror, and cursed her before asking why she had betrayed them. Sarrin however, refused to give him a reason and then gave the order to destroy Maruuk's shuttle and shot Skane - bringing an end to the escapees' mutiny.[3]

During the Siege of Terra a haggard and dirty but rational sane Sarrin was still in command of the corrupted Conqueror, desperately trying to hold the ship together despite random massacres being committed by Angron and his World Eaters. During the early stages of the Siege of Terra she became worried that one of Angron's rampages would see him murder the Tech-Priests keeping the Conqueror's reactor stable, potentially destroying the ship. To prevent this she conspired with Night Lords Captain Gendor Skraivok as well as Kharn to have Angron teleported to the maze aboard the Night Lords flagship Nightfall.[4]