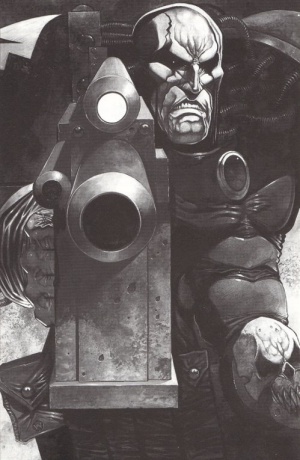 Lothar Hex, the Widowmaker[3]
Lothar Hex, the Widowmaker is an assassin in Necromunda's Hive Primus. He works for crimelord Balthazar Van Zep, and always leaves a trademark mnemonic death's head card on the bodies of his victims. Little is known about Hex, and his ability to change his face into a terrifying bestial mask may be a sign of daemonic possession, further mnemonic technology or an inhuman origin.[1a][1b][2][3]

Trained in the deadly arts, Hex was once a Guilder assassin, employed exclusively by the Merchant Guild to kill those who threatened their rule. While neither his connection to Balthazar Van Zep nor how they first met is known, Hex left their service when Van Zep killed the Guilder Alta Lago and was hunted through the Underhive. Though he is the only Guilder assassin to have quit their service and survived, he has no bounty as they have denied his existence ever since.[3]

Now the Underhive's most feared assassin (though nobody has seen his face – only his mnemonic cards on the bodies of the dead mark his passing and serve as a warning not to cross Balthazar Van Zep), he hires out his services to anyone (except outlaws, who are always encroaching on Van Zep's territory), even in gang warfare, though only when doing so does not interfere with Van Zep's interests. His fees are very expensive, and not always just in credits.[3]

Lothar Hex walked towards Drexlar, his smoking guns held carelessly by his side. The gang leader glared in drunken astonishment, too numb with terror to move from his chair. The sight that met his eyes was more horrific than anything he had seen in a lifetime of Underhive fighting. The assassin’s face seemed to blur and shift. Flesh, bones and sinew liquefied and reshaped. The human face disappeared and the face that studied him so coldly was a mask of bestial evil.
‘What are you?’ gasped Drexlar, his voice shaking with terror.
A grin played upon the inconstant features and the creature laughed maliciously.
‘I am the darkness,’ it replied. ‘I am the darkness inside you all.’

Lothar Hex was the assassin responsible for the assassinations of Sliding Jak's list, which led to widespread fear, civil unrest and even looting throughout Down Town where many on the list lived. He killed everyone named and all their people, including Guilders, entire holes and respected gang leaders, including Gideon Drexlar, the most feared in Down Town.[1b][2]

As an assassin Hex uses a variety of equipment to infiltrate his targets' locations, such as a long flexible periscope to see without being seen and a small magno-hook which can fix to any magnetic surface and support his weight when attached to a cord. In combat he uses Boltguns, either singly or in pairs, and throwing daggers when the occasion demands. After completing a job Hex leaves a small white mnemonic card on each body, with a manic death's head which cackles and winks knowingly once activated by touch.[1a][1b][2]