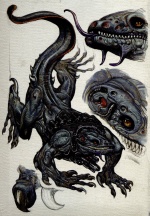 A Loxatl with detail of dew-claw and flechette blaster mind impluse link.[4]

Loxatl a race of sinuous, non-humanoid quadrupeds evolved from amphibian forms. They are commonly found as mercenaries in service of Blood Pact armies in the Sabbat Worlds region[2a], but they have been seen as far the Maelstrom[6], Jericho Reach[1] and in the Eye of Terror.[9]

In appearance they resemble a slimy-skinned, scale-less Terran Komodo Dragon, with a broad toothy head with yellow eyes (some varieties have been encountered with red, pupil-less eyes), and a flickering purple tongue that constantly tastes the air.[1]

Their natural environment is under water - outside of water, their vision, hearing and sense of smell are impaired, and they rely on their powerful senses of taste and vibration to hunt on land, making them excellent scouts and trackers, as they can taste the presence of enemies from kilometres away and feel their location through the vibration of their heartbeat or footsteps.[1]

They are slightly larger than humans and extremely swift and dexterous, and use large dew-claws to give them purchase on any surface, allowing them to run up walls and across ceilings. Their presence is often given away by the nauseating smell of a mix of rancid milk and crushed mint, believed to be some kind of chemical secretion exuded in combat.[1]

The Loxatl use unique weapons known as flechette blasters, carried along with ammunition bandoleers on their torsos, and mounted on mechanical armatures that fire the weapons through a mind impulse device. This leaves a Loxatl's limbs free for climbing. The blasters fire deadly shot-bursts filled with millions of razor-sharp filaments that shred armour and cause grievous wounds in their target's flesh.[1]

Loxatl are believed to operate in small, 'brood groups' of related kin, communicating by vibration and subsonic calls, usually led by a single Matriarch. Loxatl are normally grey skinned, but in close proximity with brood kin they communicate through iridescent patterning that they are able to flash and move across their skins.[1] Las-weapons have been reported to be less effective against Loxatl than solid projectiles, their hides apparently giving them a rudimentary form of photochromatic defence against lasers.[1][2b]

The location of the Loxatl home world remains unknown, as are any higher aspirations of the race beyond profit and bloodshed. They seem to have no ships of their own and rely on other xenos for transportation, specifically the Nicassar, Stryxis and Kroot.All encounters between Loxatl and representatives of the Imperium have been bitterly hostile. To date, the Loxatl have shown no evidence of influence by the Ruinous Powers but they willingly serve alongside the Chaos Gods’ mortal followers and other enemies of Mankind.[1]