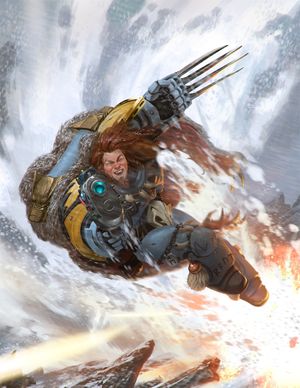 Lukas the Trickster (also known as the Strifeson, the Laughing One, and the Jackalwolf) is a Blood Claw of the Space Wolves, famous for his irreverence and rebelliousness and universally despised by the Wolf Lords. Due to this, he has never made it out of the Blood Claws despite his abilities being far in advance of many Wolf Guards. His cunning is undisputed, and even unarmed he is the dirtiest fighter in the Chapter[1a].

Before his induction into the Space Wolves, Lukas was a near-legendary figure amongst Fenris's womanfolk, famous for sharing a dozen beds in a single night. Following his induction, he has gained something of a cult following amongst the Blood Claws after "accidentally" locking an Inquisitorial genotax delegation in a grox breeding pen while the creatures were in season, and risking death when he spiked the arrogant Wolf Lord Hrothgar Ironblade's ale with the concentrated venom of a bloat-toad. Amongst his famous exploits are faking a series of transmissions that led directly to an Ork civil war, infecting a traitor cell of the Adeptus Mechanicus with their own necrovirus, and luring a lord of the Word Bearers into making planetfall upon thin ice, resulting in hundreds of Traitor Marines plunging to their death into the Sea of Lost Souls. He was also the only man to best a chameleonic Doppelgangrel, and wears its skin to this day[1a].

Arguably Lukas' finest moment was in 999 M41, when he and his Blood Claw pack were banished by Wolf Lord Dvorjac to the Elixir system, which was coming under attack from Waaagh! Megamek. The Orks' Warboss, Megamek, was a mechanical genius as well as a warlord, and the Ork horde was equipped with a huge fleet of Stompas, Dreadnoughts, and Gargants of all shapes and sizes. Instead of attacking the Orks head on, Lukas studied all available data on the planet, and discovered an ancient Climatrope at the world's arctic pole. Lukas and his Blood Claws performed a jump pack assault into the Climatrope, and then altered its programming to lower the planet's temperature to freezing levels. A few weeks later, when Lord Dvorjac and his Great Company arrived in the Elixir system to combat the threat, they found the Orks crippled, and their fleet of war machines severely damaged, by the freezing temperatures in which Space Wolves are quite comfortable making war[1b].

Lukas was only once bested, during an abortive attempt to cripple the flagship of the Dark Eldar Duke Sliscus, wherein one of his two hearts was cut out as a souvenir and he was set adrift in space - an ordeal that only a Space Marine could survive, and only Lukas could laugh about. Lukas later had a Stasis Bomb wired in place of his secondary heart, so that when his primary heart stops beating, he and the one who finally bests him will be frozen in time as a gruesome and eternal monument to his own glory - giving Lukas the last laugh after all[1a].

Shortly after the Indomitus Crusade Lukas was among the forces brought by Njal Stormcaller to Prospero. During the ensuing battle Lukas attempted to buy time for the Space Wolves to evacuate through Warp portals from Magnus the Red. Lukas confronted the Daemon Primarch and distracted him by offering him the spell of unsealing needed to control Prospero's portal network. Once he had bought enough time Lukas threw the "spell" into the air, revealing it to be a useless piece of paper, and lept into the portal as Magnus howled in fury.[3]

Lukas is armed with a plasma pistol and a Lightning Claw. He also wears a Doppegangrel's pelt, which surrounds him with shimmering and conflicting images, making it virtually impossible to land a telling blow on him[1a].

Lukas may be a play on Loki, the Norse deity also known as the Trickster.