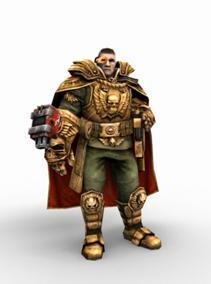 Lukas Alexander was a General in Task Force Retribution, later given the position of Governor-Militant of the planet Kronus and command of the 1st Kronus Regiment.[Needs Citation]

Alexander was originally in-charge of a section in Task Force Retribution. His mission with the task force was to hunt down the Eldar Farseer Taldeer and deliver the Emperor's Justice for her actions against the Imperium on Lorn V. His unit tracked Taldeer to the planet of Kronus. Alexander's forces landed in the abandoned city of Ironworks Bay, and there found traces of ancient relics scattered across the planet. Among these included a massive Hellstorm Cannon, a weapon from a Horus Heresy-era Imperator Battle Titan: Aquila Ignis. The city was renamed "Victory Bay", the Imperium gave Lukas Alexander the title of "Governor-Militant" of Kronus and tasked him with reconquering the planet for the Imperium from the Tau (who had colonized the planet since its abandonment by the Imperium). To accomplish this mission the unit of Task Force Retribution on Kronus were reformed into the 1st Kronus Regiment, being named "The Liberators", since the soldiers were fighting to free the humans who were living under the rule of the Tau. Unfortunately, Alexander's goals soon put him at direct odds with a Blood Ravens task force that arrived on Kronus soon after The Liberators, trying to uncover mysteries about the chapter's past. The Blood Ravens were then ordered to purge the planet in order to ensure their findings remain secret. They warned Alexander to leave, but he was determined to follow through with his orders and push the other factions off Kronus, even if that included the Blood Ravens. [1]

During the Blood Ravens Space Marines' assault on Victory Bay, Governor-Militant Alexander was killed and his palace was leveled to the ground. The 1st Kronus Regiment's 5th Company deserted after the death of Commissar Anton Gebbet, and fought along side the Space Marines against their comrades. During the last stage of the fighting, when all was deemed lost, Captain Gregor Vash ordered a Tech-priest to overload the core of the Hellstorm Cannon while the Guardsmen made their last stand. The ancient weapon exploded, killing everyone within its blast radius.[1][2]

After the fighting was over, Brother-Captain Davian Thule and Chaplain Mikelus went on to praise Alexander for having followed his orders to the end. They then arranged for the transport of the surviving Guardsmen off-world and back to Segmentum Command with testimonials that they had done their regiment proud. However, they executed the 5th Company for having betrayed their regiment even though they helped the Blood Ravens achieve victory.[1]

His Lightning Claws, named the Talons Militant[2a], and Power Fist, named the Hand of the Governor-Militant[2b], were recovered from his body by the surviving members of the 1st Kronus Regiment. Later an ornamented breastplate, named Alexander's Livery, would be created in his honour.[2c]

Lukas Alexander can be briefly seen leading the Imperial Guard troops against a force of Tau, before being killed by a Tau battlesuit, in the intro scene of Soulstorm.[Needs Citation] This is despite supposedly having been killed on Kronus.[3]