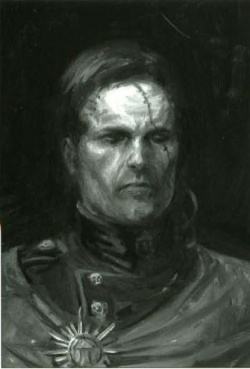 Lukas Bastonne is a Sergeant of the Cadian Shock Troopers. One of the most recognized faces on Cadia, his image is the public trademark of the Cadian regiments. His heroism and great bravery has earned him enough of reputation that he is instantly recognizable by his superiors, colleagues, and almost the entire population of Cadia. Bastonne's passion for his soldierly duty is second to none, which many whisper borders on fanaticism.[1]

Bastonne was born into the Cadian nobility which guaranteed him a starting place as an Officer in the Imperial Guard, but instead of taking the route of a typical noble, Bastonne decided to join at the bottom of the ladder, joining as a Private. What made Bastonne such an asset to the Imperial Guard was that he has a brilliant memory as well as being a great strategist. These combined, Bastonne memorizes previous tactical priorities, situations, and his squad's movement, quickly assessing situations - therefore winning victory after victory for the Emperor and the Imperial Guard wherever he was stationed. It was not long before he was promoted to Sergeant.[1]

Bastonne has lead his men to many heroic victories such as the Defense of Bloodhaven, the Destruction of the Manthral Land-Fortress and saving the Imperial Governor of the Imperial Forge World Agripinaa[1]

Bastonne's prodigious memory is both a blessing and a curse. Along with the victories he has won, Bastonne also has perfect recall of the many horrors he has seen on the battlefield, and the face and name of every Guardsman who has served and died under his command. Though he gives no outward signs of pain or suffering, it is whispered that Bastonne has every one of these names tattooed on his body beneath his uniform.[1]

Rescue of an Imperial Governor

Because of his strategic aptitude, Bastonne was called upon to rescue the Imperial Governor of the Forge World Agripinaa. Bastonne and his squad of veterans battled through the plague-ridden streets of the capital hive city and extracted the Governor. Yet even after this stunning success, Bastonne, who stubbornly refused to leave any man behind, re-entered the Hive to rescue a wounded trooper, and dragged him to safety. Bastonne eventually returned home, and all of Cadia was ecstatic at his return. News of his success was broadcast across the Sector, a parade was thrown in his honour, and Bastonne was awarded the Star of Terra, the highest award any Guard soldier can attain in their lifetime. Though, not all was as good as it seemed.

What was never made public during the massive celebrations was that the trooper Bastonne had gone back to rescue had become infected by Chaos, and Bastonne had been forced to execute him on the voyage home - another face to haunt him during his restless nights.[1]