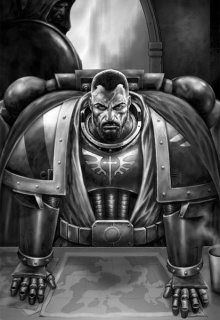 Luther during the Horus Heresy

Luther was the man who discovered the Primarch Lion El'Jonson on the world of Caliban. Like Kor Phaeron, Luther was not a fully augmented Space Marine and was significantly smaller than his comrades.[6a] 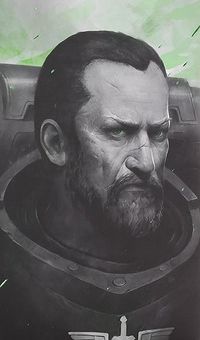 By the time Luther was a young child, his entire family had already been killed in the harsh conditions on Caliban. He studied as a squire in the Knights of Caliban under his "gain-father" Aurnrod, though these along with his birth parents were all slain eventually by the Great Beasts.[9a] Shortly after marriage, his wife and daughter also passed. Sometime after, Luther discovered the young Lion El'Jonson in the forest.[6]

Luther raised the Lion as if he were his own child, even giving him his name. Before the discovery of the Lion, Luther was the foremost hero of his times on Caliban. He presented him to The Order, the force of feudal knights on the planet who helped raise him. Together, Luther and the Lion battled rival knights such as the Knights of Lupus[9c] and the ferocious beasts of Caliban. In his first instance of lying to the Lion, Luther did not destroy the Chaos tomes of Sartana of the Knights of Lupus as ordered, instead hiding them away and slowly beginning to read them. Luther states this was his first move towards betrayal.[9c]

Eventually, the Emperor and the Great Crusade arrived on Caliban. In honor of his past with the Lion, Luther was made the second in command of the Dark Angels. But while the two were close friends, deep down Luther began to resent the Lion for the fame and glory he won with the Order and Dark Angels.[1]

While crusading with Lion El'Jonson against the Sarosh Xenos, he discovered a bomb aboard the ship which would kill the Lion. Initially his jealousy encouraged him to leave it onboard and let the Lion die, however his better nature kicked in and he disabled it, with the help of the Librarian Zahariel, saving the Lion's life.[4] However somehow the Lion discovered his hesitation, and the two had a falling out. The Lion demanded Luther and his forces return to Caliban, ostensibly for recruitment and management. However many felt this was a banishment, especially after The Lion angrily scolded Luther for leaving Caliban to fight alongside Horus during the Zaramund Campaign.[6a]

Because of these factors, Luther was ultimately left to manage affairs on Caliban while the Lion waged the Great Crusade. Luther had to deal with a rebellion by the disgruntled nobility of Caliban who had their peasant farmers and lands confiscated by the Imperium. A cabal of Chaos Sorcerers also infiltrated Caliban to bring further instability, and Luther was made aware of Caliban's possible Warp-infestation. Luther became convinced that Caliban would be destroyed by the Emperor as soon as this was discovered and became paranoid that the Lion had deliberately kept this from him as a death sentence. His suspicions grew after he learned that a cult of Terrans were in the process of a daemonic ritual, which was narrowly stopped by Zahariel, a librarian who Luther had grown fond of.[3]

These factors ultimately led to Luther betraying the Lion, rallying many of the Dark Angels on Caliban to his cause and killing any dissidents. After attempting to utilize the Chaos Cultists own powers to his benefit, Luther seceded from the Imperium, claiming the Lion had betrayed them by leaving them on Caliban while the Great Crusade continued. Luther took to reading the books of a destroyed knightly order who had studied the Warp. He put what he learned into practice - a notable example occurred when the Librarian Israfael attacked him with a bolt of lightning, and it simply dissipated.[3] However Astelan, an original member of the Dark Angels who was transported several millennia into the present when the Warp Storm tore Caliban apart, claims that it was the Lion who betrayed the Dark Angels, not Luther. His claim is considered heresy by Interrogator-Chaplain Boreas, and Commander Azrael has Astelan placed in a cell near Luther.[2]

After turning against the Emperor, the political situation on Caliban remained tense and unstable. Luther was saved from a pro-Imperial conspiracy thanks to the efforts of Astelan and Galedan.[5] He nonetheless drew increasingly distrustful of his primary advisers, Astelan, Zahariel, Griffayn[9b], and the Lord Cypher. He became increasingly drawn to lore regarding the Ouroboros. Later, Luther met the newly arrived Chapter Master Belath on Caliban, but was forced to massacre much of the delegation when Astelan initiated hostilities against them. Lord Cypher was killed in the chaos, and Luther elevated Zahariel to the position. With Typhon and Erebus' past instructions as guidance, Luther began to dabble in the powers of the Warp himself and began to try and bind Daemons to his will to combat any who would threaten an independent Caliban in the future. The works unlocked his latent psychic potential, and his power grew considerably. However despite his dabbling in the Ruinious Powers, Luther always considered himself separate from the traitors and refused to formally join Horus' forces. He sought to preserve Caliban above all else.[9b]

Luther's first formal act of defiance to the Lion was to violate his order to remain on Caliban. Luther instead sought to secure the Zaramund System, which was a strategically vital link to his homeworld. His forces quickly restored order in the Second Zaramund Campaign, capturing a number of Imperial Fists ships. After the battle Luther and his forces were shocked to discover a fleet led by Calas Typhon aboard the Terminus Est arrive in the Zaramund system. They were fleeing Dark Angels forces under Corswain, and sought aid. However Luther refused to pledge himself to the Warmaster's cause and instead hid the Death Guard fleet in the void of space by having their ships power down. Upon the arrival of the Dark Angels fleet, Luther deceived Corswain by stating he had driven away the Death Guard fleet. Luther received the Lifebane from Typhon during the affair.[9d]

When the Lion returned to Caliban after the Horus Heresy, Luther attacked his fleet. The Lion and Luther engaged in single combat. In this battle Lion El'Jonson wounded Luther but could not bring himself to kill his oldest and dearest friend. Luther, however, was merciless and sent a sorcerous blast straight towards Lion El'Jonson which mortally wounded the Primarch. At that moment, realizing how far he had fallen, Luther began to weep for what he had done to his friend, and the Dark Angels captured him and held him prisoner on the Rock. At this point, the Gods of Chaos scattered Luther's forces, the Fallen, through the warp. The intense battle, however, had made the planet unstable, and Caliban was destroyed[Needs Citation].

Luther was chained within the most secure Stasis Cell of The Rock, guarded by Watchers in the Dark and his existence known only to the Supreme Grand Master of the Dark Angels Chapter, those who held the rank before him, and High Interrogator Sapphon[Note 1]. Only let out of stasis for interrogations[9a], he is often used as an oracle to find the other Fallen. Azrael, like his predecessors, has attempted to make Luther repent for his crimes ten millennia earlier - but, like his predecessors, he has failed to do so. Luther maintains he will only recant before The Lion himself.[9c][10] He often rants and raves, claiming that Lion El'Jonson will come and absolve the Fallen, and that the day of the Lion's return is close at hand.[1]

Shortly after the formation of the Great Rift at the end of the 41st Millennium, the Fallen Daemon Prince Marbas launched an invasion of The Rock that succeeded in freeing Luther. It is suspected that Luther is now assembling Fallen into a Legion that could bring the Galaxy to heel.[7] 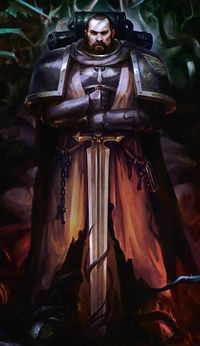