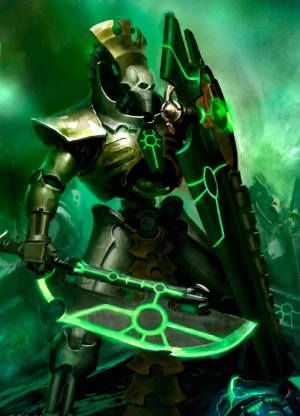 Lychguards are powerful Necron warriors of noble origin which serve as the elite bodyguards of Necron Overlords.

Lychguard are described as the ultimate bodyguards. They never tire, never give a thought to their own safety over that of their master and fight all the harder as the danger to that master grows greater.[3] Extremely loyal, it is said that Lychguards remain incorruptible and highly dedicated to their cause; before, this saying was legendary, but careful manipulation of their engrams during the process of biotransferrence saw to it that the legend has become fact. While most Necrons wear a basic suit of living metal, the Lychguard wear huge suits of ancient armour, the likes of which are normally reserved for the nobility - all the better to enable them to protect their charges, who will need strong, hardy defenders in the heart of a battle. Furthermore, it allows them to keep much of their original personality. This allows a Lychguard to serve not just as a warrior, but as a lieutenant or an emissary for a Lord or Overlord when the danger is too great for him to appear in person.[2]

Most Lychguards are equipped with the heavy but nigh-unstoppable warscythe, while a smaller number carry Hyperphase Swords and Dispersion Shields.[1] This is usually due to the influence of the specific patron each Lychguard is assigned to, for it is from his armoury that the weapons are chosen. Trading away the warscythe will slow a squad down as it cuts its away through its enemies, losing some measure of offensive might, but gains tremendous hardiness, as the shield's interlocking force barriers protect them from anything up to and beyond the deadliness of a siege shell or the blast of a defense laser.[2]

Regardless of their armament or duty, a Lychguard always favours a single, dismembering strike and unlike lesser Necrons, takes pride in his bloody work. They are perfectionists, seeking to slay their enemies with the most efficient attacks, standing still as the battle rages around them, waiting for the exact, right moment to strike. Anything less than an immaculate strike is a cause for shame to the Lychguards, some of whom will go so far as to seek out their sovereign and ask for their forgiveness.[2]