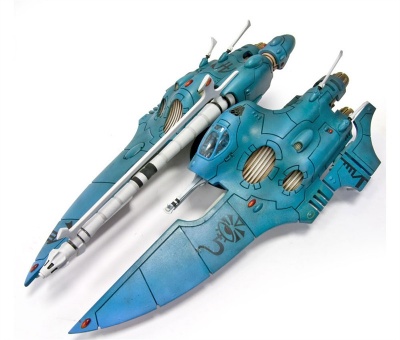 The Lynx is an ancient Eldar war machine first encountered by Imperial forces on Betalis III in 894.M41. It is larger than the more common Falcon grav-tanks but smaller than a true Engine of Vaul, though it shares superficial similarities. It is believed that only Craftworld Mymeara makes use of this unique vehicle, though whether they intend to share the design, especially with their Alaitocii allies, is a matter of grave importance to the Ordo Xenos.[1a] It is believed that the Lynx has been fought by Imperial forces prior to Betalis III, as the craft's design matches descriptions of Eldar war machines found in records dating back to the earliest days of the Imperium.[2]

While the Lynx lacks the sheer firepower found in a Scorpion or Cobra, it makes up for it in speed and maneuverability and is capable of limited flight. It is crewed by a single pilot who controls the craft from within an encapsulated cockpit, and while heavily armoured it boasts a Titan-grade Holo-field making it near-invisible to Imperial sensors. Its primary weapon is either a Pulsar for attacking armoured foes or, more rarely, a Sonic Lance for superior anti-infantry firepower. A secondary mount under the cockpit can carry a Bright Lance, Scatter Laser, Shuriken Cannon or Starcannon. Control of the Lynx's main weaponry is handled by multiple redundant back-up systems, making it much harder for enemy fire to render its armaments ineffective. The Lynx can also be upgraded to include Star Engines and Vectored Engines.[1a]

As with other Eldar vehicles, the Lynx is constructed from a Wraithbone chassis, which is specially attuned to the natural psychic abilities of the Eldar. This makes it impossible for other races to replicate or operate Eldar vehicles, and all attempts by the Ordo Xenos to activate captured and damaged examples have resulted in complet failure and the loss of many test-bed servitors.[1b]

In battle on Betalis III the Lynx was used by the Mymeara Eldar in much the same way those from other Craftworlds use Scorpions, spearheading armoured assaults and supporting other grav-tanks. Flying low and at high speeds, Lynx squadrons would attack the Imperial Guard from unexpected quarters and inflict horrendous casualties.[1a]