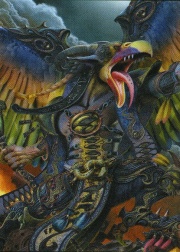 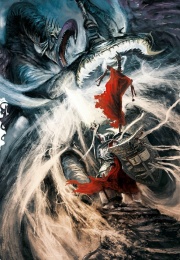 M'Kachan (or M'Kachen)[2][4] is a Lord of Change[3] and is amongst the most cunning and devious of all Tzeentch's servants, leading the Great Changehost. Although most Greater Daemons have broadly similar powers, they are by no means identical. M'Kachan, for example, disdains physical combat and relies on his formidable psychic powers and mastery of illusion and trickery to defeat his foes to an extent unparalleled by any other Lord of Change. He particularly relishes matching his intellect and cunning against those of a worthy foe, and has even been known to spare such opponents in order to allow himself the pleasure of matching wits against them at some time in the future.[1]

M'Kachan's greatest individual foe is Grey Knights Brother-Captain Stern, a renowned Daemonhunter who first encountered (and defeated) the Daemon when he purged the Cult of the Red Talon. Since that first encounter, M'Kachan has devoted himself to finding Stern whenever he returns to the mortal plane, and devour his soul. They have met several times since then and each time, Stern has been victorious. But the machinations of Tzeentch are ever-changing, and there may come a time when Stern's luck runs out.[2]