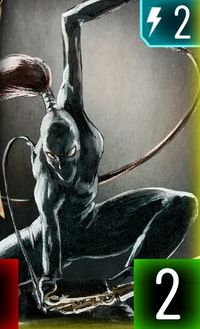 M'Shen was the Callidus assassin who killed the rebel Primarch Night Haunter.

Evidentially he already knew he was the target of an assassin, and only allowed himself to be killed to "vindicate" his rebellion against the Imperium, and show that he was right to destroy Nostramo. She took many of his precious items as personal trinkets, and cut off his head to take to her masters. She later declared to the Soul Hunter she would be remembered as Godslayer.[1]

She was brutally killed and mutilated by the Soul Hunter, as he pursued her from Tsagualsa. Her death was forseen by the Night Haunter, who although he ordered his legion to allow her to escape, knew that first the Soul Hunter, and then the rest of the legion would disobey his final order.[1]

However, the vid-log built into M´Shen's vambraces, somehow managed to reach Terra, showing the screaming gallery and containing the alleged final words of Night Haunter.[2]

M'shen is likely a reference to the real-life actor Martin Sheen, whose character, Captain Benjamin Willard, is sent to assassinate rebel Colonel Walter E. Kurtz in the film Apocalypse Now (who himself is an inspiration for Primarch Konrad Curze).