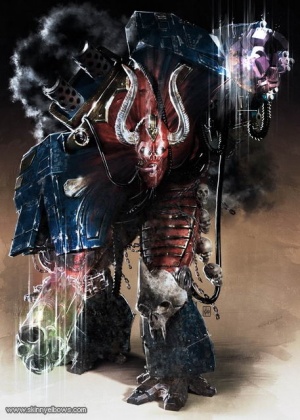 M'kar the Reborn was a Daemon Prince. His original name was Maloq Kartho, a Dark Apostle of the Word Bearers.[4a]

During the Horus Heresy, Maloq Kartho was Dark Apostle to Hol Beloth, one of the Word Bearers commanders during the Battle of Calth.[6a] After Beloth's force was annihilated by orbital bombardment, the Word Bearers were forced underground by the gradual dispersion of Calth's atmosphere and the lethal solar radiation coming from the damaged sun.[6b]

Shortly before the evacuation of the planet, Oll Persson, an ex-Imperial Army trooper who was in fact one of the last surviving Perpetuals, had, at the direction of John Grammaticus, cut a hole in reality with an athame dagger taken from one of the Word Bearers' cultists, and escaped with a small party of survivors. The daemonic entity known as M'kar was tasked with hunting them down before they could arrive at their ultimate destination. M'kar dogged Persson's footsteps across several planets and time periods (appearing sporadically throughout human history, such as at the Siege of Verdun in 1916M2). It was on the verge of killing Persson and his entire party when it was "called away", presumably to keep its assignation with Maloq Kartho.[9]

During the Underworld War, Kartho sacrificed Foedral Fell and the last remnants of his forces, as part of a trap to lure Remus Ventanus out of one of the main arcologies,[8a] so Kartho could detonate a virus bomb inside it.[8b] Ventanus would return just in time to stop the detonation and slay a daemonspawn-turned Hol Beloth with Beloth's own athame. The rapidly-changing Kartho was thrown by an impact with a Land Speeder into a warp rift that he himself had opened. The virus bomb was likewise thrown into the warp rift, averting Kartho's attempted genocide of the remaining Ultramarines and Loyalist survivors.[8c] But as a reward for his bloody deeds on Calth - including wiping out several millions of survivors with atomics, offering Fell and Beloth's remaining forces as a final sacrifice, as well as attempting to definitely erase all life on Calth with the virus bomb - the Warp granted Kartho daemonhood, and he merged with the daemonic entity called M'kar.[4a]

In 799.M41 M'kar attacked the world of Acralem, seeking to turn it into his throneworld from which he could create an empire. The Imperial counter-offensive was spearheaded by Grey Knights and in the final battle M'Kar was slain by a young Kaldor Draigo.[5]

In 878.M41 M'kar attacked Ultramar with a force of Chaos pirates and claimed several uninhabited worlds on the Ultramar borders. Captain Cato Sicarius confronted M'kar in the Helamar Rift and destroyed much of his pirate fleet. M'kar himself managed to escape back into the warp.[1][4c]

M'kar was sighted again in 935.M41 when a daemonic horde took control of the star fort Indomitable located in the outer orbit of Calth. Marneus Calgar, commanding Terminators from the Ultramarine's 1st Company, boarded the star fort and tore M'kar limb from limb, according to the official Chapter record.[1][4c]

However, M'kar resurfaced in 965.M41 when he trapped Mephiston in the crystal caverns of Solon V. He then attempted to lure Mephiston into joining Chaos as a Renegade, claiming Mephiston is already firmly on the path to Daemonhood. Mephiston rejected his captor's claims and throttled the life out of M'kar.[2]

In 997.M41, M'kar transformed the entire Agri-World of Sondheim V into his private pandemonium. Shortly after, Hive Fleet Leviathan (or Hive Fleet Kraken, depending on the source[5]) descended upon the planet, and the Sky Sentinels Chapter were dispatched to reclaim it. However, upon seeing the situation, they opted to call in Exterminatus.[3]

In 854999, M'kar attacked Ultramar again, this time with a large Chaos force. Some time before then, Warsmith Honsou of the Iron Warriors had learned of M'kar's existence and his long-standing hatred for the Ultramarines. With the help of The Despoiler's damned seer, Moriana, Honsou learned that Calgar had not, in fact, been able to destroy the daemon in 935.M41, but only to imprison its defeated essence inside the warp core of the Indomitable. Calgar detailed half of the Ultramarines' Fifth Company to garrison the star fort and guide it on a constant, random journey in and out of the warp, but M'kar's hatred for the Ultramarines was so powerful that he always left a faint trail that could lead their enemies to him.[7a]

Honsou and his newly-formed army captured the star fort and freed M'kar, which possessed the Dreadnought armour of Brother Altarion, one of the Ultramarines assigned to guard the fort.[4e] It was only after the initial attacks that Honsou realized that M'kar was taking over his army, which the Daemon lord dubbed the Bloodborn.[4b]

M'kar personally led the onslaught against Talassar, while other Chaos warlords attacked Calth, Espandor and Tarentus. Calgar himself led the 1st Company to Talassar, determined to once again slay M'kar.[4d]

After weeks of being besieged in the ancient fortress of Castra Tanagra by M'kar's daemon army, the defending Ultramarines reached their lowest ebb when Chief Librarian Varro Tigurius was finally overcome by weariness, and the psychic barrier he had erected around the fortress failed.[4e] M'kar arrived in person to finish Calgar. Calgar was nearly overwhelmed, since M'kar was able to draw limitless power from the Indomitable, but Tigurius suddenly rallied and unleashed a psychic burst that drove M'kar back and severed his connection to the star fort. Calgar rallied the 1st Company for a final charge against the daemons. Calgar was nearly defeated by M'kar, when reinforcements from the Ultramarines' 2nd and 4th Companies arrived, led by Captains Sicarius and Ventris, the latter of whom had retrieved the Shard of Erebus from Captain Ventanus' tomb on Calth.[4a]

Uriel pronounced M'kar's mortal name aloud, and threw the Shard to Calgar, who stabbed M'kar in the throat[4]. The power of the Shard was enough to destroy M'kar's essence, a True Death that destroyed the Daemon Prince once and for all.[4a]