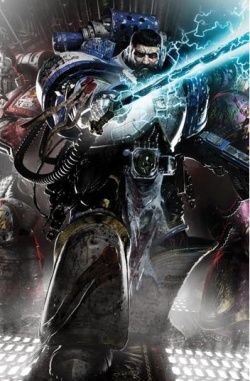 Captain Varren of the World Eaters.[2]

Macer Varren was a Captain of the 12th Company[4a] World Eaters Space Marine Legion who remained loyal to the Emperor during the Horus Heresy.

Before the Heresy, Varren had acquired a fearsome reputation among the Legiones Astartes; Nathaniel Garro described him as a frequent victor in the World Eaters' gladiatorial training bouts, with an equally impressive record of battlefield victories. But for all his ferocity, Varren also had a reputation as an honourable warrior - not, as Tylos Rubio noted wryly, a compliment that readily attached itself to many of Angron's warriors.[4a]

When Varren refused to follow his brothers in their allegiance to Horus, Angron sent his own personal guard to kill Varren. Managing to escape with the remnants of his company, Varren commandeered the Daggerline, a World Eaters frigate, and fled the Isstvan III system, much in the same way that Garro had done aboard the frigate Eisenstein.[4b] Varren was also joined in flight by Captain Rakatio and loyalist warriors of the Emperor's Children.[4c]

Garro offered Varren a place among the Knights-Errant, and the former World Eater, finding himself the only survivor of his company, accepted.[1a][4d].

Varren accompanied Garro and Rubio back to Isstvan III, in search of an Astartes warrior whom Malcador had instructed them to find. While protecting a group of civilian refugees from the "beast" that had been stalking them, Varren crossed swords with the very warrior he had been sent to find: Garviel Loken, formerly of the Luna Wolves, driven insane by the murder of his battle brothers by the Traitor Legions[1b]. Garro declared that Loken was irredeemable and had to be killed. To his surprise, Varren urged that Loken was only "lost," and it was their duty to bring him back[1c]. When the party came under attack by Plague Zombies, Varren fought bravely, until the party was unexpectedly saved by Loken's reappearance[1d]. Garro followed Varren's advice and managed to talk Loken back to sanity[1e].

Varren was part of the Knights-Errant mission to infiltrate the Vengeful Spirit during the Battle of Molech. However the team was discovered and during the battle in Lupercal's Court, Varren lost an arm to Horus Aximand while saving Loken. Varren escaped with the rest of the team, but was induced into a coma due to his extensive injures.[5]

Varren recovered, and eventually rejoined the Knights-Errant. Shortly before the Siege of Terra, Varren, Garro, Loken, Vardas Ison, and Helig Gallor were all deployed to hunt down Chaos Cults on Terra. During the Battle on White Mountain, the Lord of the Flies revealed itself to be behind the Cultist activity. Varren was killed and possessed by the Daemon and attacked his fellow comrades. He froze when Loken confronted him and tried to remind him of their friendship. Varren regained enough control over his own body to grab away a belt of grenades from Loken's armor and set them off, choosing to die rather than let the Daemon continue to control him.[6]

Like all World Eaters, Varren was short-tempered and always eager to engage in battle.[1a] But unlike his traitorous brothers, he was also steadfastly loyal to the Emperor, and possessed a strong sense of honour. During his fight with Loken, he urged the latter not to endanger the civilian refugees nearby[1b]; later, he objected to Garro's decision to kill Loken, declaring that they had already lost too many brothers to Horus's treason[1c].

Varren possessed a tremendous will, as evidenced as being one of the few characters to resist Daemonic possession, if only for a moment but still enough to end his own life.[6]

The 1989 game "Space Marine", precursor to the Epic game system and takes place during the Heresy, describes the Eisenstein in a story box through the conversation of Captains Tarvitz, Garro, Varren, and unnamed others. Their topic was to either "Betray Horus or betray the Emperor," and in it we are told that Horus had five "Chapters", incorporated warrior-lodges from Davin within them, and the Codex command structures were disregarded. Additionally, the "bulk" of the legionaries under Horus were now loyal to "feral world deities" and to Horus. Istvaan (alternate spelling in early texts) was destroyed without order from Terra, and the virus bombing was not justified. [3]

There is no mention of loyalists being killed. Captain Varren says that he has 15 men of the World Eaters, Captain Garro says 12, an unnamed voice says 10 from the Luna Wolves, and another unnamed voice says 20 from the Thousand Sons. Tarvitz says that there are 9 Emperor's Children beyond himself. In total, it represented 70. They agree that Varren will take the frigate Eisenstein because it is able to warp jump, and Tarvitz mentions that it was falling behind because of mechanical problems. The others would slow their own ships and then take control of the five ships. Four of the ships would then defend the Eisenstein and clear a path for it to flee. The World Eaters under Varren would then take the message.[3]

Author James Swallow said that artist Neil Roberts's portrait of Varren carries a strong resemblance to actor Gerard Butler, which is exactly what Swallow was aiming for[2].