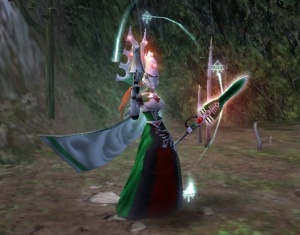 Farseer Macha of the Craftworld Biel-Tan

Farseer Macha of Craftworld Biel-Tan is responsible for divining the path of her Eldar army. Unable to leave the Path of the Seer, Macha is a knowledgeable and focused prophet.

When an Imperial Excavation team on the Planet Tartarus uncovered a Chaos Marker that leads to an ancient artifact called the Maledictum, Macha mobilized a small Eldar force to ensure that the artifact was left undisturbed. The Maledictum was a prison built by the Eldar long ago to contain a very powerful Daemon. Unfortunately, the Alpha Legion Chaos Sorcerer Sindri Myr was also keen to acquire the Maledictum, and so set in motion a scheme that would uncover the artifact and unlock its power for himself.

The forces of Chaos were now aware of the Chaos Marker. The Alpha Legion, led by Lord Bale had already made planetfall. The recent Ork Waaagh!, led by Warboss Orkamungus kept the Imperial Forces engaged in battle, and made Bale and his Chaos Space Marines practically invisible. Farseer Macha knew that the Orks' recent Waaagh! was somehow tied to the presence of the ancient artifact, and was adamant that Chaos could not be allowed to obtain the Maledictum.

The Maledictum was in danger of being found as Inquisitor Mordecai Toth of the Ordo Malleus had also been searching for some time for the dark artifact. The impulsive actions of the Imperium were always driven by fear more than understanding, and their brute force methods always caused more complications than they solved. For Farseer Macha, the Imperium could not be trusted with the handling of the Maledictum.

Four armies then came together on the planet Tartarus: the invading Orks, the defending Imperials, the skulking Chaos Marines, and the enigmatic and knowledgeable Eldar. Using her psyker divination abilities, Faseer Macha tried to formulate a battle plan that would keep the Maledictum safe. Only the ancient Eldar were knowledgeable enough to guard the artifact.

The Maledictum required a key to unlock it. Gabriel Angelos and the 3rd Company of the Blood Ravens wanted to find and destroy it in order to keep it out of the hands of Chaos. In a desperate attempt to guard the key, Farseer Macha called upon the Eldar God Kaela Mensha Khaine. One of her Eldar warriors became Khaine's avatar. Unfortunately, it was Sindri's plan all along for the Eldar and the Blood Ravens to meet in combat. While the Eldar and the Space Marines distracted each other, Sindri stole the key. To make matters worse, the Avatar of Khaine was eventually slain by the Space Marines, leaving the Eldar greatly weakened.

Sindri was a wily Sorcerer indeed. Like a skilled puppeteer, Sindri masterfully controlled the tides of battle. The Chaos Sorcerer even orchestrated the demise of Lord Bale. Now Sindri commanded the Chaos Space Marines, and for his coup de grace, Sindri acquired the Maledictum.

Farseer Macha soon realized that her destiny and Gabriel Angelos's destiny were intertwined, and it was folly to try and avoid it. Farseer Macha was forced to use her army to support Angelos as he took on Sindri and the Alpha Legion.

The Maledictum granted Sindri the rank, powers, and form of a Daemon Prince. With the support of the Eldar, the Blood Ravens, and the Daemonhammer God-Splitter gifted to him by Inquisitor Toth, Gabriel was able to destroy the ascended Sindri.

Farseer Macha saw a glimmer of hope: the Forces of Chaos had been denied the Maledictum. But Macha's hopes were dashed when, urged on by Toth, Gabriel ignored her warnings and destroyed the Maledictum with God-Splitter, accidentally setting the daemon free. Farseer Macha told Commander Gabriel Angelos that his actions had damned them all, before departing from Tartarus with her small Eldar force as a warp storm traveled towards the decimated planet.

Macha again appeared on the world of Acheron, leading Eldar forces in an attempt to claim the mysterious Spear of Khaine. During the battle against the Blood Ravens, Macha was able to negotiate a temporary alliance with Gorgutz's Orks, and are able to eventually find the Spear's vault. However when it became clear that Chaos forces risked erupting from the planet, Macha urged Gabriel Angelos to use a Battle Barge to destroy Acheron. Macha is able to teleport Gorgutz and Angelos off the world before it is destroyed[2]