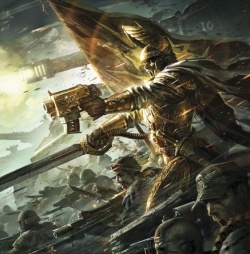 Lord Solar Macharius and his men on the Macharian Crusade[8]

The Macharian Crusade (392-399.M41) was a seven year campaign (or Crusade) led by Lord Commander Solar Macharius. It took place on the far western edge of the galaxy, within the Segmentum Pacificus and leading into the Halo Zone. The campaign brought nearly one thousand worlds into the Imperium, and was one of the most successful crusades in its history. Since the end of the Crusade there has not been a crusade of such success, or size.

It all began on Macharia, now a Shrine World. Here Macharius rallied his troops before boarding the waiting transports in orbit above the planet. Then they set off to conquer planets right out to the Galactic Rim, and even beyond the reach of the Astronomican. Many of the planets had been lost in the previous chaos of the Age of Apostasy.[2a] 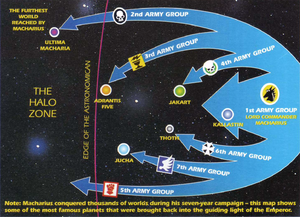 The first major battle of the crusade took place against the Cult of the Angel of Fire, which ruled over the Karsk System. Here the Cult was revealed to be a Tzeentchian front, and a wounded Macharius faced down a Lord of Change itself, rejecting its promises of power through Chaos and remaining pure.[5b] The Crusade ground on, and many alien and human civilizations were encountered. The most notable campaigns included:

Overall, in the first year of the Crusade, a hundred worlds fell. In the second year, three hundred fell. In the third, nearly seven hundred planets had fallen to Macharius' armies.[2a] Each of them was systematically wiped out or brought under the dominion of the Imperium, and in the wake of Macharius' conquering army came Missionaries of the Ecclesiarchy and Inquisitorial teams to reestablish the Imperial yoke on these reclaimed realms.

By the end of the Crusade, Macharius' armies stood undefeated and at the edge of the Western Galaxy, facing the Halo Zone and the limits of the light of the Astronomican. The region beyond was cut off from the Imperium and the home to civilizations that knew not of the Emperor. At this point, Macharius's generals and troops wavered. They pleaded him to reconsider advancing into the Halo Stars. His fleet would be slowed due to the difficulty Navigators would have in Warp travel beyond the Astronomican, and his Astropaths would be beyond the range of communication back to Imperial space. Moreover, his armies had simply run out of energy after many long battles. Many of his troops were also fearful of what lay beyond, most scout teams sent into the Halo Zone never returned and those that did told of strange phenomenon, of haunted stars and entire worlds inhabited by ghosts. Faced with this refusal to advance, Macharius became furious and accused his men of betrayal and cowardice. He locked himself in his state room, drinking himself to a drunken stupor.[2a]

When Macharius finally reappeared, he ordered his fleet to set course back to Imperial space. His soldiers cheered the Warmaster a hero, and his generals breathed a sigh of relief. However, Macharius was a broken man and his dreams of boundless conquests were shattered in the face of human frailty. His will broken, according to Imperial records on the return journey Macharius succumbed to a jungle fever he had contracted on Jucha in 400.M41[6]. However this was just a coverup by Imperial authorities, and in truth an already-dying Macharius, riddled with plagues of Nurgle received battling the traitorous general Richter on the world of Loki, was killed by an agent of the Officio Assassinorum with cooperation of the Inquisitor Hyronimus Drake for unknown reasons.[10] Despite their earlier refusal to continue the Crusade, Macharius's men deeply mourned the passing of their general and revered him as a god.[2a]

After his death, Macharius's body was returned to Doria, where the Crusade had originally began. A massive funeral took place, which was attended by Adepts, ministers of the Ecclesiarchy, Tech-priests, and many other important figures wishing to pay their respect. A million men led the funeral procession, and a hundred generals laid their swords on his ornate sarcophagus.[2a] To honor his deeds his homeworld was renamed to Macharia.[6]

After the death of Macharius himself his newly-forged conquests fell into anarchy in a seventy-year civil war known as the Macharian Heresy.[1]

To honor those Imperial Knight Houses that served under Macharius, he issued the Banner of Macharius Triumphant, which was still given to Knights Seneschals even long after his death.[15b] 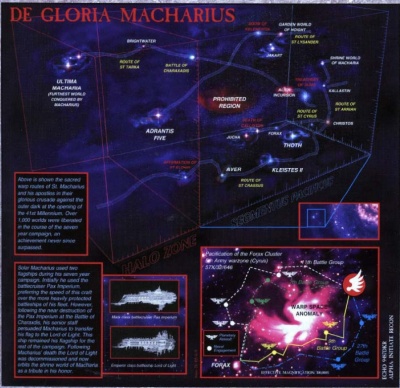 Course of the Macharian Crusade[6]

Macharius' forces were divided into 7 Army Groups, collectively referred to as the Grand Army of Reconquest.[5a] Each army group was led by a General appointed by Macharius himself.[1]

Known Regiments that took part in the Macharian Crusade include: