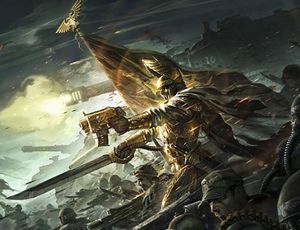 No, he was not a saint. He was a man. A very great man, and in some ways, a very wicked one.

Macharius rose to prominence in the early Forty-First Millennium during a time when the Imperium's power was finally recovering from the devastating Age of Apostasy. Born in 356.M41 as the heir of the Planetary Governor of Donia, Pella, Macharius was already a renowned Imperial Guard General by his early 20s. His brilliant leadership during the crushing of the Roxane Rebellion, where he rescued Lord Commander Solar Phillips, brought Macharius to the attention of the High Lords of Terra. Phillips recognized the genius of Macharius and took him under his wing, naming him his successor as Lord Commander Solar. It was also during this time that Macharius met the men who would go on to lead his armies: Sejanus, Borgen Crassus, Tarka, Arrian, Lysander of Choripoli, and Cyrus of Larrentine. In 386.M41 Lord Solar Phillips was killed in the Lemort Landings and Macharius inherited his prestigious command, the youngest in the history of the position. He traveled to Terra for the first and last time during his inauguration. Using his new position, he oversaw a string of early conquests on the worlds of Lands End, Morbellum, and Jalfrezi III with his Donian Army. It was at this point that Macharius expressed his desire to launch the greatest Crusade since the Great Crusade at the dawn of the Imperium itself.[4]

By most accounts, Macharius indeed fulfilled his wish and nearly one thousand worlds were claimed over the course of the Macharian Crusade. At the edge of the galaxy Macharius prepared to move onwards but his armies, never beaten by the enemy, wavered and crumbled at the prospect of exploring the psychic darkness at the galaxy's edge. The conquests of Macharius came to an end, and according to Imperial records on the return trip he died of a jungle fever contracted on Jucha, while others say he willingly died so he could rest with the old heroes of the Imperium who would not balk at danger, unlike his men.[4]

The truth however is far darker, and was seemingly covered up by Imperial authorities after his death. While battling his traitorous ex-protege Richter, who is said to have turned to worshiping Nurgle, Macharius contracted several deadly diseases besieging the traitor world of Loki and may have only had weeks to live. Macharius was eventually able to kill Richter, but was in turn killed by a member of the Officio Assassinorum disguised as an Inquisitorial Stormtrooper with the cooperation of Inquisitor Hyronimus Drake, who may have been sabotaging Macharius' war effort on Loki. However to suppress the truth of the incident, the Assassin then killed Drake as well and the reasons and figures behind this conspiracy are left ambiguous.[6]

After his death, Macharius was canonized as a Saint of the Imperium. No man has ever conquered more worlds nor won so many battles, not since the legendary days of the Great Crusade itself. So great were his accomplishments that the Ecclesiarchy declared Macharius a Saint and renamed his homeworld Macharia in his honor.[1]

Macharius was a ruthless leader, always pushing his men to greater feats of daring and courage. He would often bombard planets from orbit and destroy the native population, but he spared some worlds if they impressed him with their courage and resolve. He was a very spiritual man, campaigning in the name of the Emperor and not just for his own selfish gain. He had consuming desires, such that they were his guiding force throughout his conquest. He was also followed by a trail of miracles, one such being that a bolter shell embedded itself in his chest but failed to detonate.[Needs Citation]

He commanded many forces and he had an equally notable general, Sejanus, who was always at his side. Sejanus was the one who told Macharius that his men would follow him no further, that Ultima Macharia was the end; they would not venture into the Halo Zone, outside the reach of the Astronomican. Macharius wept, tears of rage and sorrow, as he heard of his soldiers' refusal to go on. He remained bitter to his men for refusing to go on, drinking himself into a drunken stupor and decrying that he did not have braver heroes at his command.[5]

Macharius had two vessels as his flagships in the campaign. First, he used the Mars Class Battle Cruiser Pax Imperium, but when that was heavily damaged at the battle of Charaxdis, Macharius was convinced to move his flagship to the Emperor Class Battleship Lord of Light. Macharius always preferred speed and agility, but his generals would not let him move off the heavy ship. On Macharius's death, the Lord of Light was decommissioned and placed in orbit above the shrine world of Macharia as a tribute in his honour.[Needs Citation]

Macharius was the second to hold the title of Lord Commander Solar. His brilliance as a general is further acknowledged as the Macharian Cross, awarded for innovative thinking in battle, is named after him.[Needs Citation] 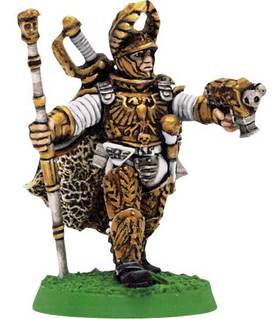 Macharius is clearly based on the historical figure of Alexander the Great: