The Cult Mechanicus also outlays a strict code of Technological conduct, dubbing a far range of innovations and fields as Tech-Heresy (Heretechnica) and its practitioners as Hereteks. These include such forbidden sciences as unleashing plagues of death across entire star systems, draining energy from stars, or distorting space-time. However the three greatest orders of Tech-Heresy are that of Abominable Intelligence, manipulating the Human genome, and study of the Warp.[10] 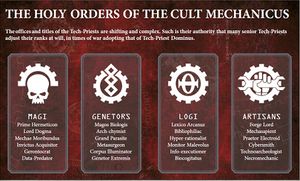