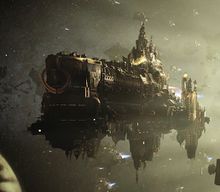 The Macragge's Honour in the modern era

Macragge's Honour is a 26 kilometer-long[1a] Gloriana Class Battleship and the flagship of the Ultramarines Legion's space fleet during the latter years of the Great Crusade, and the opening of the Horus Heresy. Currently it serves as flagship for Imperial Regent Roboute Guilliman.

Shortly before the Battle of Calth, the Macragge's Honour was Roboute Guilliman's headquarters for coordinating the muster of the Legion for its planned deployment to the Veridian system.[1a]

The ship came under attack from the Word Bearers' ambush[1b], and was overrun with daemons, but was purged through the combined efforts of Guilliman, Chapter Master Marius Gage, and Sergeant Aeonid Thiel[1c][1d][1e][1f]. Guilliman and a force of fifty Ultramarines also used the Macragge's Honour teleport pad to launch an assault on the orbital weapons platform occupied by Kor Phaeron and his Gal Vorbak elite warriors.[1g][1h] When the battle turned in the Ultramarines' favour, Kor Phaeron and his surviving men retreated to the Word Bearers' flagship Infidus Imperator and attempted to flee the system. Guilliman ordered Gage to follow in the Honour, leading to one of the most infamous naval duels in Imperial history.[1i] Macragge's Honour would ultimately destroy the Word Bearers vessel, though in the process, it would end up becalmed in the warp.[4] The Samothrace became Guilliman's new temporary flagship.[7] Sometime later during the Heresy, the Maccrage's Honour was boarded by enemy forces as they attempted to target Guilliman's surrogate mother, Tarasha Euten.[8]

During the years of the Indomitus Crusade, it appears as if the Ultramarines were able to reacquire the Macragge's Honour. The vessel served as Guilliman's flagship during the Crusade and was extensively refitted to accommodate the Primarch.[6] 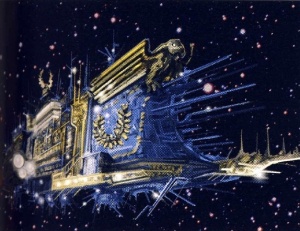