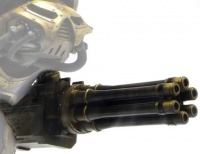 A Mars-pattern Gatling Blaster mounted on a Reaver Titan

The Gatling Blaster is a large weapon usually found mounted on Imperial Titans.

The weapon consists of several rotating gun barrels firing 150mm high-explosive shells at an extremely fast rate, making it an excellent anti-infantry weapon.[1a][2] Essentially a Titan's equivalent to the assault cannon, the sound of firing the Gatling Blaster has been likened to the very fabric of reality being torn apart.[3] However the weapon is no less capable of pulverizing even heavily-armoured Super-Heavy Tanks and its destructive potential is comparable to that of a low-level bombing run from an entire wing of fighter-bombers.[1b][3]

Galting Blasters can be mounted on the weapon limbs of Reaver[4], Warbringer Titans, and the carapace mounts on Imperator Titans.[6] It is too large to be fitted to Warhound Scout Titans.

The Macro Gatling Blaster is an enormous enlarged variant of the Gatling Blaster mounted on Warlord Titans. It is capable of firing thousands of armor-piercing shells per minute.[7]