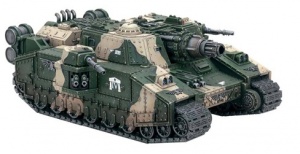 The Magma Cannon is a heavy Titan-killing weapon utilized on the Doomhammer Super Heavy Tanks of the Imperial Guard. Modeled closely on the Volcano Cannon, which is equipped on the Shadowsword, the Magma Cannon lacks the range and area of effect of its larger cousin. At the same time however, the reduced number of capacitors needed to power the weapon allows the Doomhammer to transport infantry, thus giving the tank a more flexible battlefield role.[1]