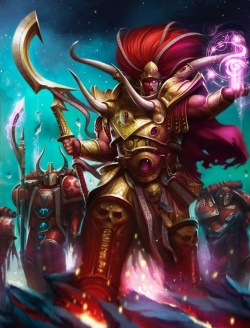 Magnus the Red: Master of Prospero is a novel by Black Library Publishing, the third book of The Primarchs series.

Lord of the mystical and uncanny, Magnus the Red has long studied the ancient crafts of sorcery. A psyker without peer, save only for the Emperor himself, he commands his loyal followers of the Thousand Sons Legion in the Great Crusade, always vigilant for any lost knowledge they might recover from the remains of dead human civilisations. Now, fighting alongside his brother Perturabo of the Iron Warriors, Magnus begins to foresee an approaching nexus of fate. Will he remain true to their mutual aims, or divert his own efforts towards furthering his own mastery of the warp?

On the Planet of Sorcerers, Atharva, or a shade of Atharva, appeared to Magnus as he brooded over his defeat at the hands of Russ. After some discussion, Atharva warned Magnus that the Warp Gods were not done with his legion, and he would need to seek help in cheating his fate with knowledge from their time at Morningstar during the Great Crusade.[2a]

Durng the 55th year of the Great Crusade, Atharva served at the planet Morningstar, where he tried to find out what led to the destruction of the pre-Old Night city of Zharrukin. When a magna-storm threatened the site, he ordered the evacuation with Conservator Niko Ashkali, an academic leading the human staff. Using his telepathic powers, he summoned the other legionairies to leave, including Phosis T'kar, but they were unable to reach Magnus. Waiting for the primarch caused them precious time, and one of the human transports was almost downed in the storm as it tried to take off. With T'kar, Atharva was able to use his power to save the ship and send it away from the storm. Knowing not much time was left, Atharva left his stormbird and ordered the legionaries to return to Calaena as he was going to find the primarch on his own. However, they stayed as Atharva ventured into the storm, but he did not have to go far when he met the primarch, whose psychic power kept the storm away. With the primarch on board, the pilot Zharrukin struggled to keep it flying through the storm. Before they could be lost, Magnus used his power again to protect the ship to the awe of the legionaries who were just beginning to learn of their primarch's power.[2b]

When they arrived at Calaena, Morningstar's capital city, they found a thriving trade hub that was busy evacuating civilians aboard the ancient mass convoyer, Lux Ferem. The stormbird traveled to the Sharei Maveth fortress, built and manned by the Iron Warriors. Once landed, Magnus ordered Atharva to join him to meet with Perturabo. The two primarchs came together, with Perturabo expressing happiness at Magnus's safety, and Magnus revealing that he discovered something important, as Atharva watched in amazement that two very different individuals could be brothers Yet he saw that they were similar in their quest of knowledge and creating great wonders. As he gazed at Perturabo's armor, the primarch questioned him as to what he saw, and Atharva replied that the Terminator plate had unique aspects, including aspects related to the Terrawatt armorers, the Narodnyan craft, and the Kholat Syakhl forges along with Ur-Phoenician script running across it. Perturabo turned his attention to Magnus, who revealed that they discovered sealed archives that could explain how Morningstar was able to survive relatively intact during the Old Night.[2b]

The magnetic storm was first noticed 6 months earlier, and it was thought to be an anomaly but was revealed to be a flaw with the planets core starting a ultra-rapid geomagnetic reversal with an unknown source. The storm was able to destroy everything it hit, and Imperial Governor Konrad Vargha ordered the planet to be evacuated as a result after having lost 75% of its population due to natural disasters. Their cries for aid were met by the Thousand Sons, who were near by, and by the Iron Warriors a month and a half later. As the last of the people were evacuated, Ahzek Ahriman marched with Kydomor Forrix of the Iron Warriors down the Boulevard of Firmaments to hunt down troublemakers and ensure orderly conduct. As they walked, Ahriman asked about Forrix's background, and he explained that he was from Eite Mohr, Terra, but felt like Olympia was home. The two bonded as Forrix described the harsh terrain that made the individual feel small compared to the universe. However, Ahriman felt slighted when Forrix said that the Thousand Sons needed to be more humble, then was questioned as to his homeland to ease the pain. Ahriman admitted that the Thousand Sons arrived at Prospero dying, that they were sick. He had little memory, due to the pain they were in when the Emperor brought them to their primarch.[2c]

Vashti Eshkol and Magos Tessza Rom watched from a starport command as ships moved into orbit as Ahriman and Forrix moved through the crowd. Ahriman sensed a disturbance before Forrix spotted a man climb a statute of Morningstar's first Light King, Damjan Torun. The man was a member of the rebelliosuc ult, the Sons of Shaitan, and he proclaimed that they would be killed and join the Stormlord. As the man spoke, Ahriman used his powers to suffocate him before the man shot himself, which was a sign for other members of the cult to fire on the crowd.[2c] Together, Forrix and Ahriman took on the cultists, with Ahriman using his psychic powers to Forrix's amazement. Elsewhere at, Hathor Maat confronted a group of cultists led by Felix Tephra who refused to flee from their home on the volcano Mount Kailash. Much to the chagrin of Iron Warrior Obax Zakayo and the other legionaries, Maat ordered them abandoned to die when the volcano exploded because they were unwilling to give up their devotion to the Stormlord.[2d]

With the Sharei Maveth fortress, Atharva admired the remarkable artistic design of the interior along with its skilled defensive attributes as Perturabo led them deep inside to his command center. There, they met Harkor and Barban Falk, who were busy disputing a course of action. When Magnus introduced Atharva as "senior Librarius," Perturabo questioned that Magnus thought the Librarians were still a good idea, then warned Magnus that an incident with the Librarians on Bezant was well-known. Their attention turned to the evacuation timetable, which required thirty more days uninterrupted or up to two months total. Magnus praised the activity, but Atharva chimed in hesitantly that the total orbital capacity would be 1.5 million, half a million short of the planet's population. Perturabo lamented that not everyone would make it, and the riots would not help. T'kar questioned why anyone would not want to leave, and Magnus pointed out that Maat met such a group. However, Perturabo made it clear that he wanted to rescue everyone, even those too ignorant to flee. Perturabo then stressed that he needed all of Magnus's men, and Magnus responded that one squad searching for knowledge would not risk anything. Perturabo stressed again the need for support, then revealed his engineering designs, including the finished design for the Thaliakron and a replica of the Antikythera, much to Magnus's delight. Magnus then explained that the Antikythera was like a sextent for the Warp for those without psychic gifts. Perturabo then reminded Magnus of the warning from the Emperor in the Hall of Leng regarding the dangers of the Warp before he smashed the device. Magnus was shocked and asked why Perturabo waited to destroy it then, and Perturabo responded that it was to warn Magnus over straying too far.[2d]

At Attar, the Gubernatorial Guard was evacuating the people to the capital at a slow rate, and the Mechanicum were trying to address the problem. Magos Tancorix admired the storm as he worked beside Major Anton Orlov. The geological shift left the port down dry, and Tancorix offered Orlov a consoling statement that there were other worlds like his home he could go to, but Orlov pressed that he would mourn the passing of his. However, that was interrupted as instruments began to predict an imminent seismic event, which soon after hit and destroyed much of the surrounding region.[2d] Magnus surveyed the region after it was destroyed: the city was burning and buildings all collapsed. With six Stormbirds, the legionairies landed and moved through the ruins to save any survivors. Following them were Iron Warrior construction ships and Mechanicum units, and Magnus gave the order that they could use their psychic powers openly as Magnus set out to find Vargha among the wreckage. Using his psychic power, he was able to find Vargha within a wrecked Rhino buried in a collapsed building. As Magnus used his psychic power to move through the rubble, survivors began to follow him as he made his way to the Rhino and freed the planetary governor. Seeing Magnus rescue the governor only caused the survivors to devote themselves to Magnus.[2e]

Atharva moved through the ruins of Zharrukin after the magna storm destroyed the already destroyed area, leaving little behind. Ashkali told Atharva that the city was all dust before she and Maat questioned why they were there. Atharva ordered them to spread out, looking for a sign of a "feathered arrowhead" that will guide them. He then questioned Ashkali if the sign meant anything to Morningstar, and she explained that some artefacts from pre-Old Night that had the symbol. Atharva recognized the design as similar to that used by the Dragon Nations on Terra, especially in the ruins of Ba-Shu. Then, Maat notified them that he found something, and they found him within a ruined building over a shaft going down with a Terran colony starship at the bottom that had the same symbol.[2e]

As Magnus used his power to heal the governor, a group of Red Dragons planetary defense force tanks arrived. A soldier questioned if Magnus had the governor and, after Magnus said yes, ordered the tanks to fire on the primarch.[2e]