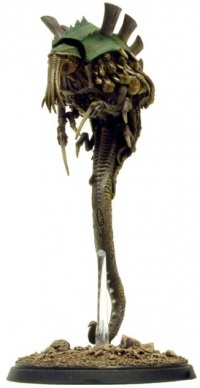 The Malanthrope (Tyranicus cadavi terriblis) is a rarely seen form of psychic Tyranid. Appearing in the aftermath of a Tyranid assault, Malanthropes gather genetic material from fallen enemies in order to allow the Hive Mind to create new bio-warriors.[1]

The Malanthrope is a large serpent-like creature that looks similar to a Lictor. It has feeder tendrils and is about twice the size of the Zoanthrope, another creature it closely resembles. Rarely seen, the Malanthrope follows behind a Tyranid attack, appearing even after Rippers. It selectively collects and processes genetic material from fallen enemies before itself being reabsorbed into the biomass. The creature grasps dead, injured and still-living foes with its long groping tendrils, stuns them with its sting and consumes them, feeding them into its maw with its small but dexterous arms. The Malanthrope's tendrils carry a venoumous poison that is injected through the skin and causes excruciating pain. This poison disables the target and the Malanthrope then absorbs its body into the bloated sacks present on its torso, where the victim's genetic material is slowly extracted and processed — a terrible death for any individual unlucky enough to be caught still alive by the Malanthrope. After it has processed the victims genetic material, it will carry on this information to Norn-Queens, who will use it to create new strains of Tyranid organisms.[1]

A Malanthrope is a highly intelligent, psychic creature with a strong link to the Hive Mind. It can only move by psychically levitating to skim over the ground.[1]