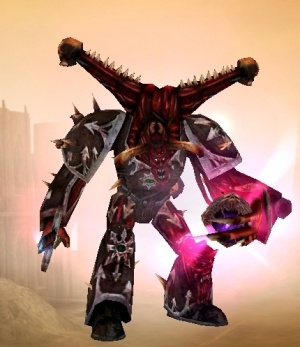 A Daemon Prince holding the Maledictum.

The Maledictum was a Chaos artifact that was hidden on the world of Tartarus. It holds an extremely powerful Daemon of Khorne that was imprisoned inside of it by the Eldar. It held a great deal of power, able to influence the humans on Tartarus, driving them to hide to insure that daemon hunters from the Imperium - who would attempt to destroy it - could not find it. With enough sacrifices done to release it, it can easily turn a mortal into a Daemon Prince. The artifact was claimed by the heretical Blood Ravens Librarian Isador Akios, but he was killed before invoking the artifact and it was stolen by the Alpha Legion sorcerer Sindri Myr. The Sorcerer had used its power to become a Daemon Prince, but was ultimately killed by the Blood Ravens. This last death triggered the release of a powerful daemon entity from within the artifact.

Though a powerful artifact, the Maledictum required a key and the appropriate sacrifices to unlock its power, and the Daemon within. The key was also found on Tartarus and the sacrifices were gained from the deaths of the Imperial Guard defending the planet, the Blood Ravens, the populace of Tartarus, and notable individuals like the Blood Ravens Librarian Isador Akios, Chaos Lord Bale, and finally Sindri himself. As powerful of a tool it seemed, its purpose was self-serving, to create the bloodshed necessary to release the Daemon.